Menschen the Movie as Art: A Brief Review 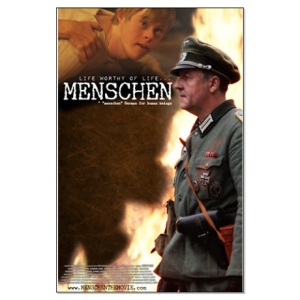 Menschen: a Work of Art

Menschen is a live action short film that packs a complex story into under 30 minutes time. The story takes place at the end of WWII, the troops are weary and history is about to declare the victors. What we are not reminded of in textbooks: on both sides of every gun beats the heart of a man, a man born to a mother just like you were, and what brought him to this place? Who knows? But we all begin and end the same.

I already digress away from the movie’s plot. Forgive me, but this film is not driven by plot it is driven by theme. And the themes are complex and full of questions, some left for the viewer to chew upon. Which I have. And that’s why I’ll be continuing my analysis as a series.

Back to the task at hand: Menschen as art. The filmography belies the budget of this independent film. Aerial shots, pyrotechnics, and “invisible makeup” gave the appropriate, heart pounding depth to take us, the viewers, immediately to war. Early on, we are introduced to a commander, the SS, and a frightened woman begging for “no trouble.”

How many years has this mother taught her son to hide, teaching him the “game?”
Shhhhh.
Oh, how my own heart breaks…

The action continues into woodlands behind the Russian lines. This ragtag team is threatened by Russian snipers and hesitantly finding their way towards surrender, now with the boy in tow. Why? 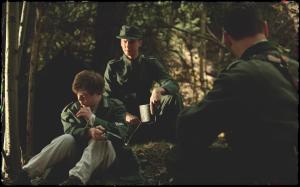 Connor Long and the cast of Menschen

Ah, the boy. The boy with Down syndrome. Connor Long plays this boy. Connor is an actor from Louisville, Colorado. He learned his lines in German and watched the director closely for his cues. This was his first film, and in 2013 he was named ‘Best Actor’ for his performance in Menschen from Filmstock Film Festival. (Rock on Connor!) Deserved. I was riveted to the screen with every moment he was on it.

Of course I would be riveted to the screen by Connor, having a son that looks a little bit like him. But not only this, trust me, much more than that. Connor conveyed what threads this boy’s life wove through the tapestry of war, fear, duty, and family. And innocence, really, if there was ever any hope of innocence among all that happened under the Nazi regime, Sarah Lotfi found a way to show us one point of light, and her medium was Connor Long.

Now, I would be remiss not to mention the other film’s star, Dan Cheatham. Clearly an actor of international worth, every line he gave was purposeful and convincing. He was our complexity. The character that pushes us to ask.

Another powerful (and a favorite of mine) component of the film was the work of composer Daniel Vendt. The music moved us through and allowed us to connect with those we have nothing else in common. Even the director confessed to me that there are musical points in the film that bring her to tears. The trailer I prefer above all, which I will share below, serves up the story in an amazing way.

Independent, but not Solo

This movie came from and continues because of a variety of partnerships. It is being presented in many areas with the cooperation of The Arc; aligned with the movie’s tagline, “Life worthy of Life.” From the very beginning, I mean before production even began and Sarah Lotfi was writing this script, she enlisted the help of reenactment groups. Their expertise went beyond costumes and, again, into the humanity of all involved with war. Actually, the fact that a movie can be called “Independent” when so many donors, organizations, and film advocates were involved in the production and in the movie’s screenings and distribution is a misnomer. All along the way it’s easy to see how so many people are finding their own human connections within this short film.

If you want to know more, follow these links: Menschen the Movie, Menschen on Facebook, and talk to your local Arc chapter and ask when there will be a screening in your area. (I have. :)) I have shared many more thoughts on varied aspects if this film. Please check out the complete series:  1) Menschen, a work of art, 2) Why is the movie Menschen important? (Featured by Gadfly Online: Culture that matters)   3) Menschen is not Just a Movie. 4) Why it is Important to See Someone “Like Me” in the Movies (on the Huffington Post Entertainment Section) and 5) Live Podcast with Sarah Lotfi talking as a director and also as a sibling – short 30 minutes listen in here. (It’s awesome.)  and 6) A Directors Siblings Inspired her. (on The Mighty) That’s how much there is to say, People!  (As I complete these segments I will come back and fill in the links.)

*Also February Update* I’m told that The Arc is sponsoring many screenings across the country starting in March. In Omaha the show will be March 26th, a FREE event but you do need to reserve your seats here.*

And the ARC US has also added these shows:

More to come as they are confirmed.