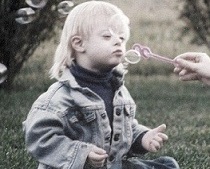 In the palm of her hand was a tiny doll with the head lying next to it.

Marcus, an adorable, toe-headed, three year old, looked at the doll, looked at the psychologist, then looked up at me like, “Are you gonna take this, or should I?”

I feel my eyebrows coming together even now in disgusted dismay. “What is the point of this?” I asked.

“Well, to see if the child understands what’s wrong and how to fix it.”

“A person, without a head?” I pressed, “Could it be any more morbid?”

“Well…” I felt a stammer. Apparently, no one else ever questioned the way this “test” worked. “It all comes from Washington, the doctors in Washington.”

“Great, some sick doctor who pops the heads off of dolls decides the requirements for my child’s school placement.” Did I say that out-loud? Or just think it? Truthfully I can’t remember.

What I remember for sure is, the whole testing event didn’t go well.  We assured the psychologist Marcus could communicate with a minimum of 20 words and signs, but on this day he sat with his big blue eyes just watching the woman, tight lipped and hands down.

Well, he did say one word. As I stood at the top of the staircase and held him in my arms, she turned to say “Goodbye,” and he replied loud and clear, “BYE!” He waved with all of his might.  Don’t let the door hit you in the @*$ May have been his sentiment as she walked out the door.

It may be redundant to point out: Marcus did not test well.

Thus began my first battle with the public school system. The home-based teacher, Gwen Powell (who was simply awesome and of course Marcus talked to her, he liked her) and I, needed to go up against – for lack of a better term – the psychologist  in order to get Marcus placed in an integrated preschool environment.

So we did.  I stated my case in front of what felt like a jury of principals and smarter-than-thous looking down their noses at me.  But, it worked.  Marcus entered an integrated preschool that fall.  He had a lovely teacher there as well, and for the next two years the public school experience was exciting and fulfilling.

The preschool classroom was in a public elementary school. The lockers seemed so big and the sixth graders were giants compared to my little man walking down the hall with his tiny backpack and quiet smile. It felt to me that he learned well and, most importantly, enjoyed being with the other kids.

In the spring of 1995, Marcus was 4 years old and in his second year of the preschool program.  More testing. Testing that concluded that he belonged not in an integrated program, but a special needs classroom for the most developmentally delayed student. We were given two school options in the whole district and encouraged to visit those schools.

Marcus would be 5 in June.  If Marcus could wait one more year, have one more year, he could start kindergarten at age 6. Not out of line (I fact well within state requirements).

I went higher up the public school ladder and asked again.

We had a long drawn out meeting. I explained that putting Marcus in a severely handicap classroom would be the worst thing for him. He learned best when challenged. He also knew, already, how to people to do things for him, if he so desired. Give him one more year in the integrated program, please.

“The preschool program ends at age 5. Period. We do not make exceptions.”

We had to find another option.

#This is a #TBT originally posted in August of 2013, but clearly an even longer throw back to a part of our journey that happened 20 years ago.  I am saddened to see so many parents still fighting this battle. One moment it seems better, and then the next…Ah well. Keep on. Keep on…