If You’re Worried About a World Without Down Syndrome, Read This and Share

My Most Important Job

Roughly 27 years ago the universe looked over my resume, took into account my previous experience, my qualifications, and my goals and gave me a job that I was totally – I mean utterly – unqualified for.

And as an added bonus and complete surprise, the universe also immediately promoted me, as a show of good faith, to the role of “special needs parent.”

The application process was cleverly disguised, I won’t bore you with those details but the final result was a new lifelong job with very few personal days, occasional opportunities for “working” vacations, and joyful benefits beyond what I ever expected.

From the Outside, it didn’t look good

At the time of my son’s birth I was an unemployed, single, barely-in-college student. Although my pregnancy came as a shock, my father stood by me, almost singularly, those twenty-seven plus years ago.  When the most recent prenatal testing came upon the market, I confronted him with the question, “If you knew my unborn child had Down syndrome, would you have pressured me to abort?”

“Who you were at that time?” He paused, “And who I was? Yes.” He was solemn in his honest reflection. Then his expression changed. “Can you imagine?” he exclaimed, the smile bursting from his face, “What a mistake.”

That conversation slips into my mind as I read about women learning a potential diagnosis at only 10 weeks pregnant, and what those around them will offer as advice.

Sometimes, It is Hard

I admit, there are times I’ve thought, “This is hard. Too hard. In fact, this may break me.”

Because, as previously noted, I am a mom.

So far as I can tell, by comparing to every other parent I know, these feelings are part of the gig. It’s one of the features of parenthood that you know going in, but you don’t really know, right?

For me, the thing I feared the most was losing him. From the moment I met my Marcus, I could no longer bear the idea of life without him. Oh…there were then, and continue to be, many other fears. Fears for his health, his safety, his well-being, random extensions of his own fears, and bigger fears about the world in which we live and his place within it.

For example, when Marcus was less than two years old he had heart surgery. This was one of those unbelievably hard times. That was 25 years ago and I am ever thankful for the achievements of medical science and the surgeons and staff who did their part to give Marcus his chance at, well, life.  We may have to rely upon compassionate professionals again, someday, but right now Marcus is a strong adult with a full life.

However, because Marcus has a visible diagnosed disability, Down syndrome, his life is one that I feel we are constantly obliged to prove its worth.

And that, World, is exhausting.

Exhausting, but I’ll do it now, and again, for as long as I have a breath within me, and if my words carry on, long after I’m gone, too.

Tuck in, we’re not done yet

The most recent reminder of this came last week via news stories that broke into mainstream media of a trend that’s been growing for a long time, the systematic reductions of people being born with Down syndrome around the world. The latest CBS report about Iceland ran with the headline: “Inside the country where Down syndrome is disappearing.”

The very short version is that, through selective abortion, there are only about 2 children with Down syndrome born per year in Iceland. Iceland is a very small nation, of only 330,000 people. Still, that’s a live birth rate of a child with Ds of about 1 in 1600. As a matter of comparison, the live birth rate in Ireland (where abortion is less common) is 1 in 546.

Iceland isn’t alone in this phenomenon, for example, that 1 in 1600 rate is the same in France. Denmark several years ago even proclaimed the selective termination rates as an “fantastic achievement” and noted they will be “Down syndrome Free” by 2030.

Since I know first-hand, and happen to adore, so many people with Down syndrome, this attitude is heartbreaking…but not new.

When Marcus was born, and as late as 2006, there were 1 in 700 live births of a child with Down syndrome here in the US. This is not currently accurate. Since then much has changed regarding prenatal testing, and consequent selective abortion rates in the US, most significantly to include a blood test that is issued as early as 10 weeks. The testing is no longer limited to “high risk” mothers and now includes fancy brochures and marketable names like, MaterniT21. For example the 2010 study published in the Genetics in Medicine Journal and summarized by Mark Leach on the website Down Syndrome Prenatal Testing notes

“…the final take away is that in recent years, through prenatal testing and selective abortion, Massachusetts is experiencing a reduction rate of 49% of all live births of children with Down syndrome.”

OK, that’s enough numbers for the moment. You get the idea. This process of elimination of a Down syndrome through selective birth is called eugenics. I could go on for days about what kind of world this creates, and in fact I have.

Today, I’m going to narrow down to two points.

First: My son’s life has value.

My son’s life is “worthy.” I mentioned he is a strong adult with a full life. Even if he wasn’t strong, even before he wrote a children’s book, even if he never spoke at the United Nations (which he has), even if he suffered a terrible accident tomorrow (as any of us could) his life, as every other person with (or without) Down syndrome, has, and always will be “worthy” because he is a human being and therefore worthy of the dignity of life. This is my value system, full stop.

I fully acknowledge that not everyone feels or lives this way. I unabashedly wish everyone did, just like I wish for world peace. How we get to world peace, and the achievement of dignity of life for all, is apparently not a clear-cut case.

I believe that most of our fears come from the unknown. The old saying, “Information is Power” holds true now as ever before. Since I don’t speak Icelandic, it’s been difficult for me to find what resources for information and support are offered to expecting parents, I don’t know how these resources (or lack of) are affecting this overwhelming decision to abort. However, I can tell you tell you what we’ve got going on here.

Not all people want their information presented the same way. Some families want to do “heavy” research while some prefer personal connections and other family stories. It’s vital that parents can find the kind of support that meets their needs, and that the information is not outdated. I still run across many sources of misleading information about Ds. That is why I supported the bill in Nebraska and the resultant websites and criteria.

Of course, no medical professional or parent is given either a crystal ball or a magic wand. Every person born is unique with their own set of challenges, strengths, and range of abilities. In the case of people with Down syndrome, there can be extensive medical issues or there may be simple, treatable, medical issues. For example, my son is like millions of other people who sleep with a CPAP machine to help with his breathing at night. Also, as I am fond of mentioning, “There is no prenatal test for potential.” This is true for everyone.

Just as there are stereotypes about people with Ds, there are also preconceived notions about the kind of person who is the parent of a person with Down syndrome. I believe this also adds undue pressure on people faced with a prenatal diagnosis.

In my own experience as a young woman with a newborn, I felt like I was somehow left out of whatever secret guide book other “special needs parents” were given. This feeling sometimes prevents parents from reaching out, particularly while they are still trying to understand why they were “chosen” for this gig. The Parent’s Guide to Down Syndrome addresses this with the reminder:

“No parent really knows how this whole thing works. We’re all winging it.” And “Don’t let your previous image of ‘special needs parent’ keep you from connecting with other parents, who are, in fact, flawed humans, too.”

It’s A Lot About Not Going Alone

I hope that those who are struck and surprised by eugenic patterns react by sharing updated information and resources with the families who are faced with a potential prenatal diagnosis, and also offer up the necessary encouragement and long-term support and inclusion needed to help those same families thrive in their communities. 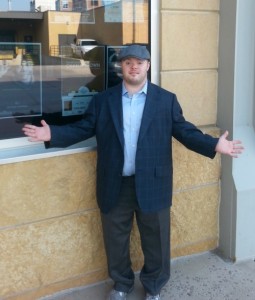 I am ever aware that there are, will be, and always have been people who feel that my son is not worthy of life. For example, the Nazi T4 program began its systematic killing with children and adults that looked like my Marcus, and that chills me to the core.

When I speak of it, or even cry over it, Marcus is the one who takes my hand and says, “I’m here.”

Marcus is the one who reminds me to teach love, and to be patient. Yes, he has struggles and yes, he works hard. He is human, after all.

I have argued before that Marcus actually makes the world a better place. I stand by that, and hope that he lives a long life, even in a world that is still learning to accept him.