A Little More about the Evolution of a Story

Marcus and I are writers. The good thing about being a writer is a writer is a writer no matter what. There is no prequalification other than to create – to tell the stories that dance in your imagination – and then to carve, frame, and sculpt those stories into something… Something more.

As Marcus and I started talking to groups about creating Black Day, the first thing I realized that needs clarification is: Marcus did not just sit down and tell me a complete tale in one sitting. No, good stories, At least in our world, require time, questions, and editing. 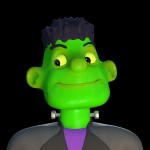 Years ago he told me about a monster band, he cast his dad, who’s a drummer, as Frankenstein, and filled in the monsters with other people we knew. Another time, he talked about a monster band that came alive for one day. This band was called Black Day. (More about his influences here.)

Marcus often tells his story primarily via dialogue, which is logical since his primary entertainment of choice is theatre. Years back, I saw a call for submissions for a local theater’s Halloween show and I thought, “This could be a great venue for Marcus,” and, honestly, it gave us a purpose and a deadline to make a complete piece of work. I really liked the idea of Black Day, I suggested to Marcus we come back to it. We even went to a cemetery to look at the tombstones and think about the mood and set. (He had always said the concert would be in a cemetery with tombstones on the set.)
I started to press him for a adventure and a conflict. (The original adventure was the monsters wanted to play a concert and the conflict was they were alive for one day, just to give you an idea of how the story has evolved.) When Marcus told me that the monsters told Brad, “You can’t be in the band!” I knew then, he was on to something.

When Marcus told me that the monsters told Brad, “You can’t be in the band!” I knew then, he was on to something. Click To Tweet

In the beginning, there were several different ideas and points Marcus explored; we missed the original deadline for the one-act, but I hadn’t given up on the idea that there was something special lurking here. As the story began to come together, I created what’s called a “mind map” to clarify characters and the story’s timeline. I looked for where the gaps were. This is when I really began pushing Marcus, asking the tough “why’s” and “what’s next” questions.

As mom and co-writer, it’s not always easy to trust blindly wherever Marcus’ mind wanders. For example, in the early stages I really doubted the whole trap-door idea, but then it led to what I consider to be the most amazing line in the book, which I can’t tell you ‘cause it’s a “spoiler.” When he said it, I nearly fell off the couch. I can still see and feel that moment as clear as a bell. My first thought was, “That’s awesome!” and my second thought was, “How’s he going to get out of this?” 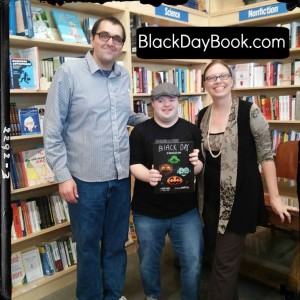 It turns out, the trap door sequence is the perfect amount of scary momentum needed to move the story forward. I’ve learned to follow him into the rabbit hole.

Much of what Marcus writes, as I said, is dialogue and action. For my part, I did a little bit of research o creating story-books and learned to add cues, like the sound effects, “Knock, knock, knock,” and “Swish,” and to question, “What do you think he saw?”

Similarly, when it came to Noah Witchell, the illustrator, he coordinated with Marcus at every step. He makes sure to understand Marcus’s intention and got his approvals. There’s even a collaboration that is a sneak peek into book two.

Which reminds me, we better get back to work!

What questions do you have about the process of creating Black Day: The Monster Rock Band?   And if you don’t have Your copy yet ->