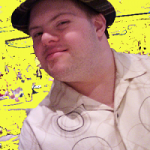 Marcus Sikora is a 28 year old creative soul who has Down syndrome and lives in Omaha, Nebraska. He has acted on stage with local and national companies as well as written a short one act.

His first animated short and book for children is Black Day: The Monster Rock Band, which has been featured on websites both nationally and internationally. He has spoken to groups of all ages, in schools, libraries, book-stores, and even the United Nations!

When he’s not watching theater, singing, or working out, he’s contemplating the sequel, as well as his biggest ambition, Marcus the Musical.

The at-home Marcus could eat peanut butter and jelly every day for the rest of his life and be Fine with that.  His favorite “myself” pastimes are watching Broadway and tearing papers. His favorite “doing” pastimes are “Broadway List,” Protools, and voice lessons. He loves his two cats, Uncle Red and May. And he looks forward to meeting Marilyn Monroe in heaven.

That’s a pretty good snapshot – but if you want more – just poke around. He’s pretty fun and a good teacher, too.