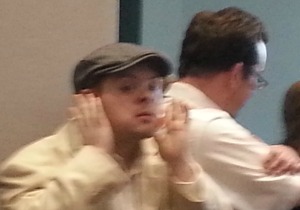 The picture above is from a few years ago when during a presentation put on by the actors and teachers of the Ollie Webb Center, the actors were asked to show: “Orange.”

This was in 2014 and is still one of my favorite *Marcus is who he is and take that world* moments. I’m going to tell it to you again today, from Marcus and The Loud Mouths Festival.

THE BEST PART Came the second night. (Yeah, I saw it twice.) One of the prompts to the actors went like this: Jim (the director/teacher) took one of these:

Then he said, “That’s not a ball catcher thingy, that’s an antenna!” He demonstrated on his head and passed it to the next person.

The next person said, “That’s not an antenna, that’s a baseball bat!” He swung it and handed it to the next person. (This is all impromptu, you know.)

The next person, “That’s not a baseball bat, that’s a frying pan!” and so on.

The ideas were fun and spontaneous.  I may play this myself, or use it in a writing prompt (Writer’s Group Beware!). On down the line.  The first night when it reached Marcus, he also said something logical yet fun. I remember thinking I wanted to remember what he said…but I don’t.

The second night, however…The person before him said, “That’s not a Unicorn horn, that’s a candy dish.”

Marcus took the piece and said, “That’s not a candy dish, that’s a dead donkey!”

Take that, all you who limit your imagination to things like baseball bats and frying pans! That – my friends, is a dead donkey.

You’ve seen Marcus’ mad impromptu skills from when he and Quinn record, Quinn has had some technical difficulties lately, so we are overdue to share a new video. They do have a short playlist created though, here. I’m delighted at the unabashed turns Marcus imagination takes. 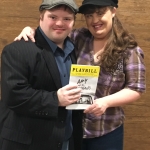 In other news, but great news, Jamie Brewer has been nominated for a Drama Desk Award!!! A few years ago I wrote, Can a person with Down Syndrome win a Tony Award? (Short answer, Why not?and I mean it.) I’m so thrilled for Jamie Brewer, this is a huge honor and she deserves it! I’ve shared a bit about the show, Amy and the Orphans.  and there’s even more still to follow.

So Marcus had a real-deal audition himself a little over a week ago. Another one of those moments I  witnessed with amazement. Proud to be watching him do his thing, sprinkled with a little hope for humanity that can come from an accepting and gracious set of community. The team he auditioned before seemed both ready to accept Marcus and what he can bring “to the table” while also still being impressed by the unexpected. I hope I can tell you all more about it later. For now, I continue to hold it like a locket close to my heart.

This is a FTSF linkup with my friends who are talking about a photo this week. Check out the others and link up with friends here on Finding Ninee.