Yes, My Son, an Adult with Down Syndrome Lives at Home 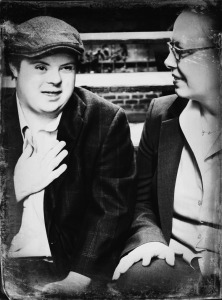 The first thing you should know is this: Marcus is an adult with Down syndrome and he lives with us, not because he has to but because we want  to live together. Like millions, really, well over 6 million, families with adult children who live “at home” in the US today, this is the best option for us right now.

This well thought out answer is based on the following factors:

Let me take you to a night many years ago.  I hopped downstairs in the split level home we shared with my grandmother. Quinn said, “You look happy.”

Personally, I feel like the American nuclear family isn’t always the best idea. Extended families living together and taking care of each other, as is common in other cultures, may not be such a bad idea.

That said, in the “old days” people kept their adult children with Down syndrome in their home because a) they planned to outlive their children and b) the other option was institutionalism. These two factors are not the rule anymore. The life expectancy of a person with Down syndrome is now 50-something* so it’s probably best to plan on longer term care than outliving the child.  And who wants to outlive their own child?

Options for an Adult with Down Syndrome

The second and more tangible issue is that an adult with Down syndrome has many more options now, each based on an individual’s capabilities. There are group homes that cater to various personalities as well as assisted living apartments and roommate options galore. Not to mention that some people with Down syndrome may choose to live entirely independently, Marcus isn’t one of them, but the options are expanding for many adults with Down syndrome.

I could see early on he was both independent and also a homebody. As an infant, if there was an event that brought him out to entertain, as is every baby’s first and most important function, after so many oohs, tickles, smiles and cuddles, he would finally give me the, “Alright-Already,” look. And as I laid him in his crib or playpen you could see the relief cover his face. “Finally!” he seemed to say, “I thought you’d never leave me alone.” He would get fussy not because he was tired, necessarily, but because he just needed his space.

And that’s the point I’m slowly, but surely, getting to; he needs his own space. So at the time, I thought that may likely translate to him wanting to live in an environment away from, well, me. 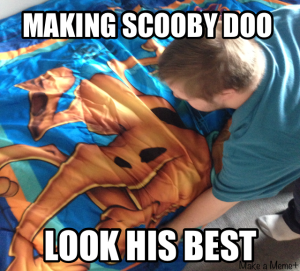 Independent, but at Home

But then came Quinn. Quinn is perfectly okay and encouraging of Marcus living with us. The house we bought has a finished basement that we have considered turning into a small apartment.  There’s already a bathroom, there’s room for a living and small kitchenette area and a bedroom. But…there are no windows. So the investment to make it safe for sleeping and updated for Marcus to live a bit more independently hasn’t yet made it to the top of our chosen debt investment.

We’ve also talked about a duplex. But again, there is the cost consideration.

Of course, there’s also what Marcus wants. His first choice would be a hotel in Las Vegas or maybe London, wouldn’t we all? In the meantime, he agrees, home is the best deal.

If you’ve been following the short life of this blog, or you know me, you know that when it comes to Marcus, I am a terrible procrastinator. Lucky for you! Because I will be looking into the options for Marcus in our area, not because we are in any rush but because we need to know and have a back-up plan in place. When we get to that, I’ll let you know.

In the meantime, don’t look at me like this is some heavy burden. Oy! This is our choice and we like it. In fact, as I type this, Marcus and Quinn are happily enjoying a Simpsons(r) episode together before we all do our part to clean up the house for a dinner party tomorrow. But you are still free to ask about it, really, ask away!

#This #TBT Blog was originally posted in October of 2013, and has made the rounds via guest blogs and also on the Huffington Post since then. We’ve made so many new friends, I thought it’s a good idea to share again today. Feel free to comment/share and if you’d like updates from Grown Ups and Downs, not too frequently, join the club here.