They Probably will do More Amazing Things

Priceless = So precious that its value cannot be determined.

In July, Google Alerts led me to an article, which shared chunks of a letter that rocked my world. Today, I read the whole letter. I met the young writer responsible. And introduced Marcus to her and her schoolmates.

This week I am co-hosting a blog hop with the prompt “What is priceless about” – I intended to write about today, anticipating there would be much to tell. And there is. The moments that were tricky, there and lurking. The cool and surprising bits, like trading a book for a shave in a Maryville barbershop. My emense gratitude for allies in our life like Noah and his family.

Overcoming, working through, sharing, meeting, and holding close all of this, created a day of priceless moments.

Over it all, however, are Hadley’s words. I got a peek at a partial in July, but now I’ve read the complete letter to author Beth Vrabel,  and today her mother gave me permission to share.

Hadley, a 5th grader from Missouri, wrote this:

Your book Pack of Dorks really got me thinking about Down syndrome because Lucy’s baby sister, Molly, has it.

Before I read your book, I had not been around anyone with Down syndrome and I did not know very much about it.  Then, I read your book which made me develop questions about Down syndrome.  The main part that got me thinking was when all of the parents came rushing over the new baby, Molly, and when they saw she had Down syndrome they just stood there in shock.  When I read that part, it made me wonder why a lot of people are rude and not understanding around people with Down syndrome.  I think it seems really sad that people think other people like Molly are not as good as them just because they have disabilities.

After I read your book, I read a picture book named “Black Day: The Monster Rock Band” that Marcus Sikora wrote.  This picture book is about Halloween costumes that come to life and play music as a rock band.  They will not let a human boy named Brad join the band because their owner is afraid an angry mob will come and hurt them.  The costumes eventually let Brad in the band.  When they started playing, a mob did come but they just wanted to listen the music and it became a Halloween tradition.

After I read your book that had Molly with Down syndrome, I wanted to learn more.  I looked up some facts about Down syndrome and then I looked up about the book Black Day: The Monster Rock Band because I knew Marcus Sikora had Down syndrome.  I watched his interview online and wanted to read his book.

I am glad I read your book.  It inspired me so much I wanted to do research on Down syndrome.  Your book got me thinking about how we should not judge people with disabilities by what they look like on the outside because most people who see someone like Marcus Sikora would not think he would be a great author and be doing amazing things.  When Molly from your book gets older, she might be influenced by how other people think of her because if someone thinks of you badly, it is not as encouraging.  I think that if everyone keep saying “Oh, I don’t think you can do something because you have a disability,” people might not try to do amazing things.  But if people would be more encouraging of people with disabilities, they probably will do more amazing things just like how Marcus Sikora wrote a book.  The next time I meet someone with a disability I will  work to see into the person and not the disability. 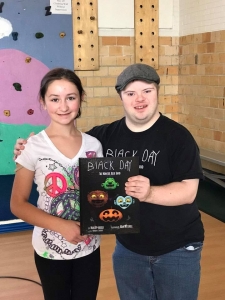