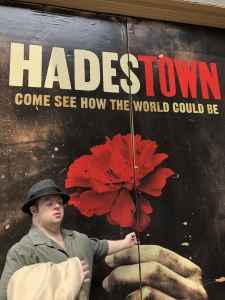 Times Square and theatre fuel Marcus’ busy brain like nothing else. He absorbs and reflects the energy and passion.

When Marcus is one of a group of many, it’s hard for him to be heard and share his ideas. When he and I travel alone, especially on a theatre trip, he shares constantly; we chat together non-stop. In fact, this last trip I marveled internally at how much he had to say in every conversation, never at a loss for words.

A vivid reminder that just because other people can’t understand him, doesn’t mean he doesn’t have plenty to share.

For me, theatre both fills me and drains me. An emotional and artistic bloodletting. My mind sparks at the immensity and power of art, artists, and ideas. I’m invigorated by the music and theatrics. I’m exhausted from the intensity.

And the people – so many people!

This trip we saw three shows: Beetlejuice the Musical, Gary: A Sequel to Titus Andronicus, and Hadestown.

Incidentally, has every show always had heavy death themes? or just on this first trip after watching my mother die? Oh me.

Anyway, On to the shows… 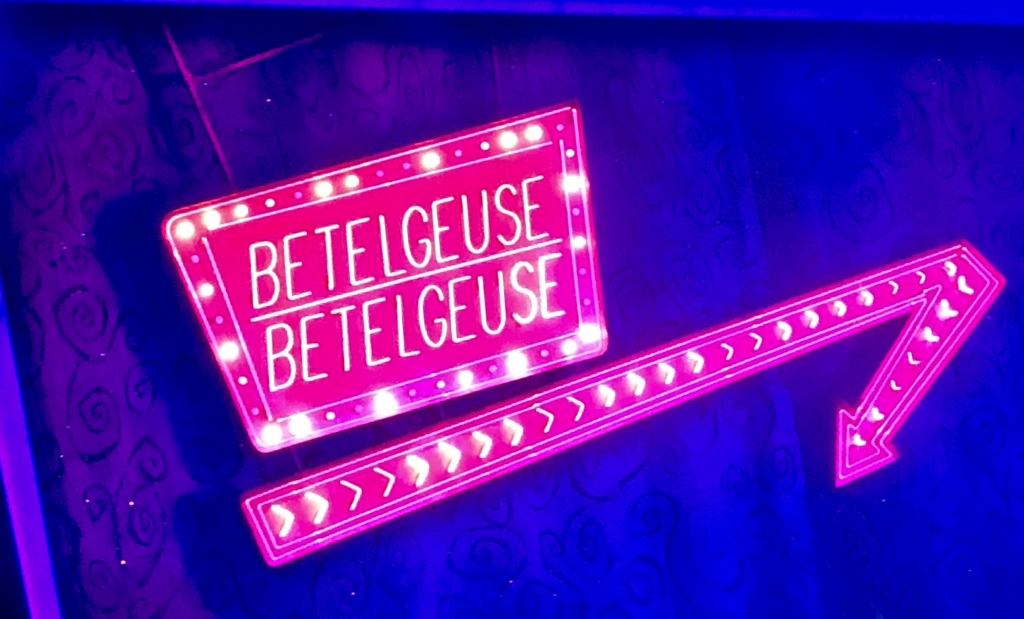 Beetlejuice was a spectacle. It felt fresh (even though the source material is 25 years old) and the performances were incredible, with Lydia (SOPHIA ANNE CARUSO) doing stand out amazing work. Here’s a sample:

This was Marcus’ favorite show of the three and the centerpiece of the trip. He took a lot of spark and inspiration from one gimmick involving the pig at the dinner party. There are no details too small in theatre. 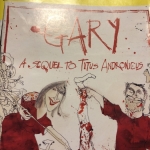 Marcus’ first statement after this show was, “Nathan Lane is a genius.” Of course it’s been said before,  Marcus agrees.

Three #Truths, or what each character wanted to be true…Janice tried to clean up (and take care) of the world in order to keep it spinning. Carol had to take responsibility for the one thing, the one thing she could do, for one life. Then Gary, ah our clown, he developed the ambition that if he could make one, perfect piece of art/story/show – A Foolery – then that piece of work, the voices, the act of community witness, could change the world. Can an artist change the world?

In the end, there was a lot left to clean up. Carol changed a life. And yet it was Gary who continued on…

Did I mention it took place after a massacre and was billed a comedy?

It was complicated. I liked it.

The moment in @GaryOnBroadway when Julie White walks on stage with the baby in her arms. “I did it.” Oh weeping me, in a comedy. #TheTinyAwards

Hadestown knocked my socks off. Marcus loves the music and said he was “shocked” after the show.

Another tale where the artist hopes the story, the song, the individual, can change the world. But, it’s a tragedy, ya know.

I left the theatre asking myself, How can a song change the world if the powerful aren’t listening? And How can we change the world to a better whole when we are each so individually broken?

Hadestown promises to take you to hell and back. That it does.

The best of Broadway sometimes breaks us before bringing us back again. @hadestown Thanks for the trip.

Interestingly, the day before we traveled, I found this scratched in one of my many notebooks:

What if I wrote the most beautiful yet boring story the world has seen?

A story where humans worked hard together in a way that fills them with satisfaction but stops before exhaustion. A fable full of laughter from joyful expectation.

What if it changed the world?

So, Hm. Me too, I’d like to find the art that changes hearts and minds and actions and consequences…yes, Marcus and I will keep trying too.  Marcus gives voice to so many themes he and other advocates face, we often share on storytelling as advocacy. We’re no stranges to telling stories to create change. 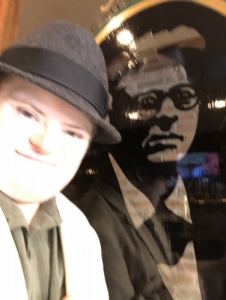 Marcus and Yeats at the Playwright Pub in Times Square.

“Tread softly because you tread on my dreams “ – Yeats

And also us. Just sayin’…