Are You Sure That’s Normal? 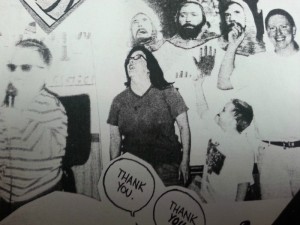 Most of the people I hang out with, and this may shock you, aren’t exactly normal. Nor would they ever desire to be. Which, of course, is a lie. There are times we all wish we could be a little more normal, normal gives the illusion of easy, without problems, or obstacles.

This is a Blog Hop. So, hoppers: What do you think? What are the ups and downs of normal? What’s normal anyway? Do you wish for it or abhor it?

Here are a few of my non sequitur thoughts about normal:

“Normal is overrated” says my T-shirt &

In Marcus’ early years, normal became a particularly bad word. Judgments on his progress, on his development, inquiries about his normal. Blech. It always made my skin crawl. Besides, who calls their child normal? Is that supposed to be a compliment?

Also the way people spoke to me, told me what was normal for me to do or feel. “You will grieve the loss of the child you didn’t have,” I was told, “That’s normal.” No one said, “You will love this child, your child, as much as any other mother ever could or will love a child.” To this day I get the feeling that people see the bond between my son and I and I feel like they don’t think it’s, well, normal. And frankly, I think that’s weird.

Marcus is 23 and lives with his parents, a lot like over 6,000,000 other adults in this country. Take that normal!

And lastly, whenever I hear the world normal I can’t help but think about a group my father was a member of while I was a kid. National Organization for the Reform of Marijuana Laws (NORML). Well, I’m not sure he was an “official” member, but he did have a t-shirt and he did believe in the cause. My childhood wasn’t what some would call…well, you know.

What do you think of when you hear normal? What’s normal to you? Join the hop and share your thoughts!