Back to School (Of Rock!) 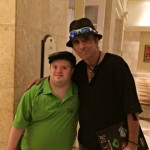 Marcus has met a few celebrities in his time, as you’ve seen if you hang about a bit. Some of the artists have been true inspirations to Marcus’ work.

The first was Alice Cooper a few years ago, obviously a huge influence on Black Day: The Monster Rock Band. (You can follow up on that here: “Worlds Collide” )

This last Friday night we attended an Omaha Performing Arts event that featured Brian D‚’Arcy James.  You may know him from films, we know his work from Broadway. We’ve seen him in two shows in NYC, first in Shrek the Musical and next in Something Rotten!  (We also met him once on the streets of NY while he was on his way to work, as the king in Hamilton, and we were headed to the show across the street.)

To show you a little of Marcus’ fandom. This is 9:00 in the morning the day that Shrek the Musical was supposed to arrive on DVD.

@briandarcyjames RT This is @MarcusMusical waiting for #Shrek The Musical in the mail. May be a long day… pic.twitter.com/aOKXJM8Wnd #BigFan

During the show Marcus got to gift Brian some love and encouragement from the back row, and was reciprocated with a thumbs up. That was a cool moment.

Marcus came prepared with a copy of his book autographed to Brian, which we sent backstage after the performance. We were pretty pleased just knowing the book would get into Brian’s hands. 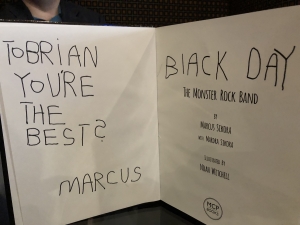 We stayed for a post-reception and were thrilled when Brian came out to chat with Marcus and thank him for the book. The crux of their chat: Marcus glowed to share his work and ideas with someone he so admired and Brian was gracious and supportive of Marcus‚’ ambitions. Fortunately Brian prompted me to get a picture, because I would’ve missed it in the moment! Here you go: 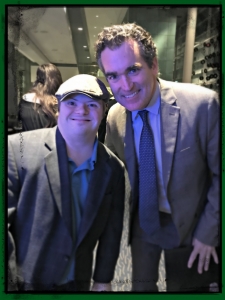 The event themed itself with School of Rock – The Musical, including menus on real vynal records. Pretty fun stuff. Marcus and I saw School of Rock in NYC last year. It was a Marcus pick. We went in with differing expectation levels. Turns out, the show was not only fun and funny, it was also surprisingly heartwarming and inspirational. You can see more about that trip, here.  Now we‚’re excited it’s coming to Omaha so we can share with our friends!

In-line with the theme, Brian D‚’Arcy James sprinkled his performance with a few treats. Early on he did a favorite of mine – “Tempted”  by Squeeze. This is just a tease of his performance.

Later in the show he did “Vienna” by Billy Joel. As you know, I’m a lyrics girl and I felt this song speaking to me. Here’s the Billy Joel version with lyrics:

So, I may not be “juvenile” anymore, but a few lines stuck with me:

And then also, which seems contradictory to the previous notes:

Which leads me to another back to school factor: football! I neglected my adulting responsibilities yesterday and threw the whole day away because I got tickets to the NE football game. I am a husker through and through and I love football. But going to a game means taking a whole day, it’s as long (or longer) time investment as Harry Potter Play Parts One and Two! Anyway, Quinn even came along- just to be next to me- and though “we” didn’t win, it was an eventful game, a beautiful day, I got sunburned, and Quinn and I got to enjoy time together. Oh! And a stealth bomber provided a flyover which was Holy $;@! Awesome.

Back to School is Black Day Season!

One more back to school connection, do you have Black Day Book and DVD to share at your school? No time like Halloween to talk to all the little ghosts and gouls about inclusion, individuality, and rock and roll! 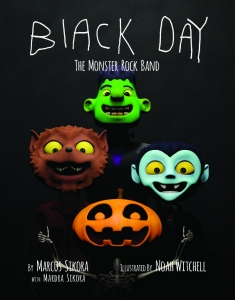 Thanks FTSF peeps for the “Back to school”  prompt, It’s a late post, but love to party in this hop. You too can read and write-along here.

And if you want to see more of Marcus’ adventures!  Join The Club here. 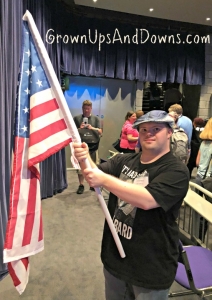 PS, Why Yes, that is a “Hard to be the Bard” shirt from Something Rotten that Marcus wore while holding the US flag in rehearsal as a delegate flag bearer in Glasgow earlier this summer. 🙂