Last Weekend, We Were All Beautiful, with Video to Prove it

Last Sunday morning I “wrote out” some of the preceding three days’ amazingness. Unsuccessfully. 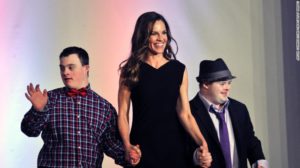 Image from CNN article on the event. Jason Connolly Photographer.

Then…then we went downstairs to the lobby bar, Marcus wore the gold hat he chose for the after-party, and we chilled. Relaxed and celebrated with friends, some who we rarely get to see because they live 500 miles away and some who drove those 500 miles to support Global and to see Marcus…Do. This.

Which brings us back to last Sunday.

Marcus slept and slept. I went downstairs. We were invited to a lovely follow-up brunch, what’s that phrase, “The heart yearned but the body wasn’t willing” – ? – or something like that. Marcus said he’d rather sleep, then he said he’d rather do a “Just Us” Broadway List. So, we did. Marcus worked out several pages of Martian Marcus the Musical. I marked the pages, we may come back to that. It had some good stuff.

Physically, emotionally, and brain-wise, I crashed hard Sunday. The funny thing is Marcus woke up pretty euphoric. From relief or from the win, I don’t know. He proclaimed, “I won!” a few times over the weekend, because, he did.

And, like many other of Marcus’ wins, when he wins we all win.

The event raised $2.1 million dollars for Global Down Syndrome Foundation, the Sie Center for Down Syndrome, and Linda Crnic Institute for Down Syndrome. I am continually impressed by the ambitious goals, scope of work, and the real change and actionable science these organizations bring to the world, for people with Down syndrome and their families, both in the present and for the future.

The Global Event teemed with press and the news has spread. Many articles have featured a photo, or two, with Marcus. And these points don’t even touch on how incredibly warm and loved we all felt to be with the friends who came out, seeing other friends who made the trip, feeling the energy in the room of all the support and excitement, plus the new friends we made. Oh, MY! The new friends we made.

You see my conundrum? This is nearly 500 words in and it’s only the cliff’s notes! SO I’ll share the (worth a thousand words each) pictures now, instead.

This week I’ll also create a link-up with all the news bits I find. ‘Till then, this one’s pretty much all about the man of our hour(s) – Marcus and his Be Beautiful Weekend.

PS – Quinn was there. However, there is no evidence to this fact. Hmm.