Also because he was beautiful. He smiled readily and his eyes sparkled.

In those first few months, I watched his deep blue eyes, expecting them to change into brown, or hazel, or in-between-green-and-something-else, like mine. After he turned a year old, I celebrated the knowledge: Those blue eyes are here to stay!

*Side bar: Neither of Marcus’ genetic parents have blue eyes. So it was a pleasant surprise to me that I carry that/those gene(s). I happen to be studying, for lack of a better term, eye color for other fiction and non fiction projects. This led me to the interesting discovery that blue eyes are 1) becoming increasingly rare in our part of the world, and  2)There is evidence that as much as 16 different genes could be responsible for eye color in humans. Thank you Wikiedia.

Since I first wrote this post I have also discovered, very unscientifically, an unusually high percentage of people with Down syndrome have blue eyes. However, it’s not the blue we’re speaking of today, it’s the stars.

A few months after his first birthday, Marcus was at an evaluation of some sort with several clinical and scary looking people and one of them used the words: “Brushfield spots.”

“What?” I leaned closer.

“What are you talking about?”

“The tiny white spots around the iris of his eyes.”

Have you never looked at your son’s eyes, woman? The scary looking clinical person squinted this attitude at me. Then he pointed out the tiny stars circling the pupil of his eyes. 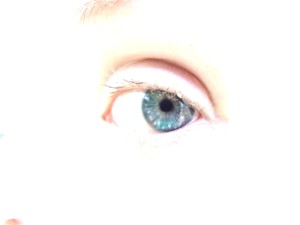 I swear the person told me there are 21. 21 stars in a perfect circle to match the 21st chromosome connection. (Now, that tidbit I have never found authenticated from my vast 3 pages of research online, but that’s the way I remember it.)

Anyone may be born with Brushfield spots, but it’s far more common in persons with Down syndrome. I rushed home and showed my grandmother. I stared at his little face and those big blue eyes and saw clearly the small white spots that created the depth and sparkle I so loved, I never isolated them from the whole, so I never saw them before. But now, holy wow! There are little blessings, even physiological blessings, that that 21st chromosome kicks in now and then.

They say that the Brushfield spots don’t affect a person’s vision but sometimes I think Marcus’ sees the world in a different light. Maybe it has something to do with the stars in his eyes…

They say that the Brushfield spots don’t affect a person’s vision but sometimes I think Marcus’ sees the world in a different light. Maybe it has something to do with the stars in his eyes… Click To Tweet
*Our good friend Kelly, who used to stare at the ceiling fan with us, took these great photos of Marcus’ starry eyes.

What about you, do you know someone with stars in their eyes?

This is a reboot post originally posted in July of 2013. Since then Marcus has published his first story-book for children, taught kids across the country, spoken at the UN, and walked the red carpet with Marissa Tomei and other superstars!

If this is all  new to you, thanks for stopping by, feel free to leave a note or for emailed updates, not too frequently, Join the Club Here