Cabaret Broke Me And Then

So yesterday I locked my keys in my car. This morning I went into work, sorted the mail, put things in piles, and realized…that’s all I got. So I headed out, locked the building, got to my car…no phone. I left my phone on my desk. After retrieving it, I decided what I really needed was coffee. I got to the coffee shop and discovered, I left my wallet at home.

I know what this is. This is what happens when my brain is too full. Too much is going on. My brain gets overstuffed and then the “little things” fall out and I become “absent minded.” This is the universe telling me two things: 1) Ease up on the accelerator, baby. 2) It is past time to organize and clear away some space in your life/space/brain; dooo it.

In the same breath, I’m also reminded of the line in this song by Of Monsters and Men:

“As I looked around, I began to notice, that we were nothing like the rest.”

I’m always amazed and surprised when I am reminded how, “nothing like the rest” my family and I seem to be. I guess what surprises me about that is, some people are “like the rest.” I don’t really know those people. Yet, I hear they are out there. But that isn’t what I wanted to tell you about today. Today I want to talk about:

Truth & Fear. How Cabaret broke me. And, as always, Marcus.

Exposition: When I saw Cabaret was on the line-up, I didn’t feel a strong urge to see it. What I knew was that it was a sex filled musical, with lively music, and depressing themes. I assumed it similar to Chicago in that way. Marcus has the movie; I’d never seen it. Personally, I like shows that make me feel good. Well, this show the Omaha Performing Arts with the Roundabout Theater Company did a cool new thing. They had a lottery for last 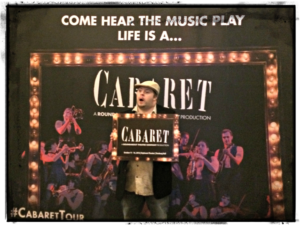 minute tickets at a discounted price. So, I thought, What the Hey? Marcus entered the lottery. Well, OF COURSE HE WON. (Marcus is particularly lucky.) Soooo, we bought the discounted tickets for very good seats and headed downtown.

Leave Your Troubles Outside

Act I  featured plenty of raunchy songs, dances, sex, and drugs – and incredible talent. The performers were amazing. Right at the end of Act I, the Nazi’s entered into our little bubble. So, at the intermission, Marcus and I chatted about the show so far.

Me: “Looks like we’ve just learned the conflict, too.”

It occurs to me now, as I type this, that no one spoke the name Hitler. We had just been introduced to the visual representations of the swastika. As the second Act began, our Emcee came out into the audience. Marcus is generally not shy to breaking the wall. But for me, well, we’ve entered into Nazi Germany now and…I’d like to keep Marcus on my side of the fourth wall. Don’t see us… don’t see us…my heart stood still.

Act II:  The drugs and alcohol no longer soothed. Some of our characters denied the pending doom, some denied each other, some denied themselves. Just like history, after years of denial or conformity, it still felt a surprise when the end came with concentration camp pajamas, machine gun fire, silence.

It is, of course, a tribute to the talent of the cast that the impact hit me squarely like a kick to the chest. I stood at the end, lined up to leave the theater, in a trance.

Marcus bought the CD soundtrack and we walked the short walk to the car. On the drive home we talked about the show. In our usual analysis format. We discussed the elements.  Marcus answered these points.

The Adventure: “The Cabaret.”

The Conflict: “The Nazi’s”

The truth? It was hard to face, hard to swallow. Is this the truth? “You can’t change the wave of evil. There is no escape from bad people.” I said.

Yes. I…I’m so thankful you are here.

I asked Marcus, “What do you think was the truth?”

He said, “Life is a Cabaret.”  Yes, I guess that is a truth, too. We all put on our makeup, our costumes, and go on with the show.

Once we got home, Marcus and Quinn settled in with a frozen pizza and I went right up to bed. Don’t tell me it’s “just a show.” The threat that there are humans who desire to eliminate those who are, “nothing like the rest” is and always has been real.

Is it true that there is more good than evil? Or does evil always have more power?  As these men convince the masses, climb the ranks, as history repeats itself time and time again, can they ever be “stopped?”

When others look in and think how hard we must work, or how hard it must be, those others are wrong. My life is easier, my weight is lighter, my heart is full even when tears stream down my cheeks, because My Marcus takes my hand and says, “I’m here.”

Also there’s this, not related at all to Cabaret, but with the lyric, “I began to notice that we were nothing like the rest.”

As to the first parts – slow down, clear out – too much – I’m still working on that.

As to the rest – all as accurate this year as last.