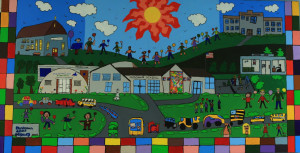 So we left off last #TBT blog at the impasse between the public school system and me when Marcus was not yet 5 years old.  What happened next is someone told me about a local school for special needs students called the Madonna School.


In 1995 we toured the school, a small converted church in Benson, desperate for an option…We were greeted by book pages covering the principal’s floor. He apologized for the disarray, explaining he was creating the 40 odd math syllabuses for the nearly 50 students.

“Wait-” I said.  “You don’t force everyone into three peg-hole options?” Marcus was only five years old and I already displayed battle fatigue from our public school experiences.  The idea of school staff being on the same team as Marcus, of our educating and preparing him together to face the world-that concept created hope.

A small back room served as SR. Mary Evangeline’s office, Hulk Hogan’s autographed photo stood out as an enigma.  It wouldn’t have surprised me in the least if she told me she beat him in a wrestling match and pulled the winning belt from under her desk.

The story of the school’s beginnings, as I remember it, was that she went to enroll children from the St. James Orphanage into the public school system and they were turned away as “uneducable.” From my few conversations with the Sister, I expect her reaction was something similar to “Hogwash!”  She began schooling them herself, believing in their potential to develop academically and cultivating their capacity for independent living.  She became not only educator but also advocate in the community for those developmentally disabled – believing and proclaiming the value of caring for all God’s children.

In that first tour I felt the missing something from every other school we toured to that point: love.  And I also felt a very powerful spirit of determination.  Other halls I walked through dripped with defeat, not these. Even in the tiny classrooms and cramped halls, purpose filled the air. *From the Madonna School Blog.

So we chose the Madonna School.

Keep in mind, this was nearly 20 years ago. From what I understand, the public schools here have made many positive changes regarding better integration options for students with developmental delays. One way I can see this in action is that there are fewer and fewer children with Ds enrolled in the Madonna School, proof the local systems are at least more inclined to encourage inclusion and integration.

As the public schools started to make changes, the Madonna School also grew up around us, ultimately moving into a beautiful school building (with lockers and everything), this decision was reevaluated a few times, like anything as important as this should be.  In fact, we even homeschooled for one year.  (I think I bored the hell out of him. He returned to school, “More ready to learn than ever!” by all accounts.)

Now, after all is said and done, he has graduated from the Madonna School program and has learned life skills that support him at work and home today. I still find myself looking over my shoulder, did I do the right thing? Should I have continued the fight? (Even though I had already “lost” – all walls were up.)   Should I have gone back and battled the system to integrate Marcus into the public system the next year? Or the next?

But then, of course, I go…Nah. All things considered: academics, peer involvement, school activities, long term goals, safety…The Madonna School was the best choice for us.  My final analysis went like this: In the end, what is most important? Relationships. Friendship. Love.

I have to say with all honesty Marcus does not have close peer relationships. Turns out he’s an introvert (more on that later). However, he had the chance to. His opportunities were presented in a safe and open environment. That, World, is what I chose to be the most important thing for his development.

So, my apologies to all other parents, I did not fight that battle for you. I have however, and continue to, champion the Madonna School in its efforts to provide a safe, loving, environment for their students. In fact, at Marcus’ graduation ceremony the department head of the transition program said, “We love you,” to her graduating students. We love you! 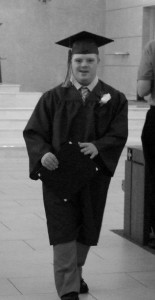 The president of the Madonna School and Workshop organization listed each graduating student by name and detailed his friendship with him or her. Friendship with each student? That’s crazy-talk, perhaps even forbidden in many public school systems. I knew in those moments, I did make the right choice.

I think what’s most important to to recognize that every family has to make their own choice and also that, every community, school, and system is different. Truly, I’m Pleased as Punch for the families who fought and “won” the inclusion battles. However, to be fair, no matter HOW hard they fought, they didn’t do it alone or in a vaccum. Someone had to be open to listen, to try, to allow for their children to be there.  Many parents have pushed and pushed hard – Thank Goodness and I applaud them – but for those who fought and lost or fought and found only the headache of beating their head against a wall. Well, that’s a reality too. Sadly, even today and UGH. And it makes me all the more thankful that we had an option here for our son that was, as I said, safe and full of love.

This has been #TBT post (originally posted in Aug 2013) as a follow up to School Choices Part 1. This is one snippet of the Marcus Story – if you want to stay tuned with old and new adventures, Join the Club Here. 🙂