A Community of Can (Can You Imagine?)

At a recent Gala Event for Omaha’s Ollie Webb Center, we got all dressed up and Marcus and I took the stage.

The Ollie Webb Center is our local ARC and does great work with vocational, educational, and artistic training and experiences. When I

asked Marcus if he would like to help at this event he said, “Yes. The answer is yes.”

This is how the speech began:

I help my Mom and Dad.

I fill the pop machine at Barnhart Press.

I work in an office.

I am a storyteller, an author, a singer, and a speaker.

Here is a clip of part of that opener. If you’re nervous about having enough to say in a speech, here’s a #ProTip Marcus has discovered: Encourage your audience to applaud at every pause. Really draws them in and makes the most of the time allotted. (Lordy!)

Much of the presentation doesn’t “translate” directly to the written word because it included considerable banter between Marcus, myself, and the audience. We started with a quick survey. We discovered that many people in the audience can swim, but no one had swum the English Channel, even in a relay group. I confessed I don’t really swim. Marcus isn’t really a swimmer either.

We discovered that several people have written and published a book. Following that, we found that only two people in the audience had modelled with a supermodel on a red carpet and runway. (Marcus and Jacob Gerringer!) 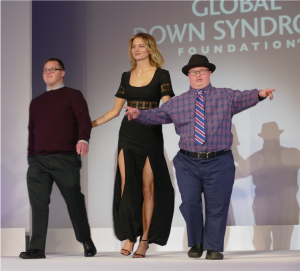 Jacob at Global’s Be Beautiful Be Yourself 2017 event

We noticed that many of the audience had given a public speech, but only one had spoken at the United Nations. (There was this guy -> ) 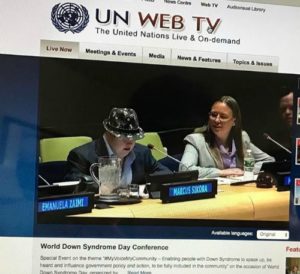 The results of our informal survey found, “I’m not great with numbers but, for the record, it looks to me like the only person in this room of about 350 people, who has a published book, rocked the runway with supermodels, and spoke at the United Nations, also has Down Syndrome.”

Yes, my friends, there are things…tasks…that are hard for people with an intellectual disability. But there are so many other CANS out there for all of our friends, with and without disabilities.

Then I went on to talk about Karen Gaffney (who swam the English Channel in a relay team and received a doctorate of humane letters). 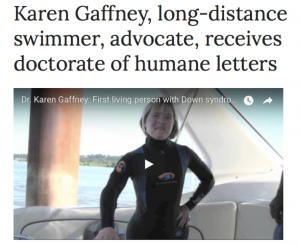 Also, Jamie Brewer (this is the night before she won WON the Drama Desk Award. Squeee!)

And, of course, our friend Connor Long (who won an Emmy award in addition to several acting awards). 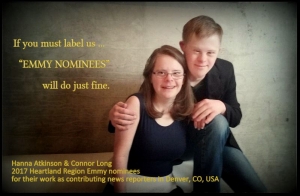 Then we came back to Marcus…

Marcus told everyone about Black Day: The Monster Rock Band. Including:

What’s the truth of Black Day? Be Who You Are.

Because “kids grow up and have their own kids.”

Is it always easy to do what you want?

And we showed the “About Black Day” video.

Can you Imagine a Community of Can?

The crux of it all is this, years ago, Marcus and I were at a community theatre seeing the musical Spamalot. Marcus told the actor that played King Arthur that he wanted to play Arthur. That actor reminded him, “The greatest of journeys begin with one step.” Marcus takes steps every day. He studies theatre. He takes voice lessons. He auditions.

What’s important is that when these opportunities come up, Marcus says “I’ll try.” That attitude alone opens doors and that’s the attitude that we have to, as friends, families, caregivers, support members – have to both encourage and listen to.

To me, it looks like encouraging people to contribute to their community with their unique talents and skill sets. A community of Can is when employers, schools, government, and organizations work together to both allow and support individuals of all abilities to contribute to our greater community.

Can help, can teach, can try, can give…both concrete and abstract, let’s look for and emphasize each person’s can.

This is true for you, too, ya know.

Several years ago, I asked Marcus “What do you want to be when you grow up?” He pondered a beat, looked me in the eyes and said, “Myself.”

Right. Can you imagine?

Can you imagine what our community, what our world, would be like if all we each just kept working, kept taking the steps, pushing ourselves to become, the best possible version of…ourselves? What could our world look like if we each commit to being our best self? And let’s support our friends and neighbors to do the same.

Since it was, in fact, a party. We closed with the “We are the Band (Black Day!)” Music Video.

Then Marcus finished up by engaging the crowd: “We are the Band!”

I love that bit.