There’s a billboard in our area that says, Live Fearless.

It gets under my skin, it irritates me, and I argue with it the rest of the drive.

Before we dive into the conceptual, first I have to get this off my chest: this phrase is also, technically, incorrect. Live is a verb and fearless is an adjective. If you’re going to encourage people to live (verb), the correct accompanying word is fearlessly (adverb). Live Fearlessly. I’m not an editor or a grammar professional – but I really think I’m right about this.

I don’t love fear. I’m not a big pursuer of fear. For example, I don’t like scary movies because I don’t like being afraid. I assume other people like being afraid because of the feeling of relief at the end, the satisfaction of coming out the other end. I don’t crave this feeling. I recognize its value, but I don’t go out looking for ways to be afraid.

But hey, sometimes we have to do things that we’re afraid of. To grow. To do what’s important. To live. 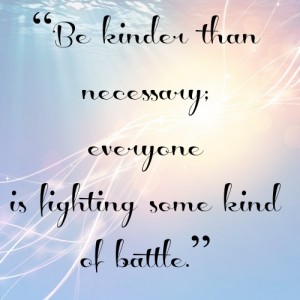 I suppose, from the outside of our four walls, what we Sikoras venture out to do doesn’t look very fearless. But of course – as the quote goes – “Be kinder than necessary; everyone is fighting some kind of battle.” (Perhaps JM Barrie, perhaps Socrates, perhaps both…if the internet can be trusted.)

The first time I read that, I was struck not only at its truth but at its secret core. We often make assumptions about someone else’s battle – when it’s really something hidden, deeper and stronger than the battles that lay out in front of them.

Marcus’ battles are like this, too. Those who just look at him or even know him in passing may think his battle is (fill in the blank), those who know him better may think his battle is (fill in another assumption), as his mother – and workclub partner – I know some of the battles that others are not privy to. However, I do not know them all. (What mother does, am I right?) What I do know, and I feel is fair to say, is that Marcus, like all of us, has his own dragons to slay.

Something Scary Coming Up 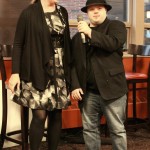 Marcus and I have a few scary things – to us – coming up. Believe it or not, each public speaking/public event we do is not exactly comfortable, and most of those are with, and in front of, people who have invited us, are maybe even excited to meet Marcus and embrace his talents. This week, conversely, we trek to the State capital to talk to our state legislatures. We are going to advocate to strangers with power. We will have “supporters” there, we will be only two of several advocates involved, but, frankly, I’m afraid.

I’m afraid there will be words that Marcus will not like. I’m afraid people will judge him and by extension, others who cannot be there to speak up, themselves. I can’t even really articulate all of the fear bundle. 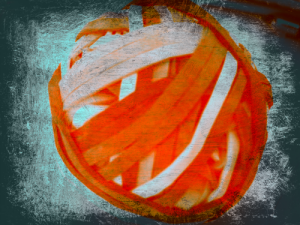 This is a fear bundle. It both swirls in the gut and buzzes in the brain.

I asked him if he would join me to talk to the government folks at the capital and he paused, then said, “Ok. I’ll try.” So, we will try.

When I get nervous, I get cold. Then I start shaking. It’s pretty annoying and very inconvenient for public speaking purposes. (If you want to witness one tough day of that, check this admission/blog.)  For me, fear physically reveals itself this way. So right now, just thinking about this upcoming commitment, I am having a bit of difficulty typing as the chills spread through my body.

Then there’s another scary thing, for me, coming up. As I clicked through to register for an audition, yes audition, I began shaking so thoroughly that I could hardly hit “send.”

What to do with this fear? The part of my brain that wasn’t slipping into hypothermia looked at me and said, “I guess you gotta do this then.” If you want to grow, if you want to learn, if you want to live – sometimes you have to face the fear.  And yes, there is a difference between nervousness and fear. There are many times I’ve just been nervous, before speaking or performing, it’s not the same. That energy can/should be funneled. Fear must be faced.

Now – back to the word: fearless.

In thinking about it, I realized that the word is fear-less. Not fear-not. And that is a bit of what we’re going for. Do what scares you then, next time perhaps, you (I) will fear-less. Then I thought, it’s not a hyphenated word – it’s one word and as one word it is defined differently. The definition of “fearless” first says “without fear.” Ok, not fear less – but fear not. But the second definition is brave or bold.

Well, that’s completely different! There is no need to be brave if you lived without fear.

Brave is facing fear. I imagine that being fearless, under the definition of living without fear, actually feels a little empty. Bored even. When the dragon is slayed – if it was done without fear, where is the victory? Brave, however, brave is honest. Brave is full. The aftermath of bravery isn’t thrilling, it’s content. It’s a rest well deserved. Bravery leads to growth and pride, self assurance and relief.

Brave is a point word for Marcus.

Like anyone, there are challenges that feel insurmountable. There are places, internally and externally, it is hard for him to go. At some point over the years, the term brave came into the conversation and he related, connected.

He knows what fear feels like. He knows it is not easy or a given to be brave. Sometimes we have to talk ourselves into it, be encouraged to go for it, sometimes we have to face (the thing). That is brave. You may recall when I shared how at one of our school events Marcus chose this as a key point to tell the kids: “Be Brave.”

He knows. He does not live without fear, he faces it.

I try to face it, too, but I’m going to need an extra sweater.