Down Syndrome and Anything Can Happen (if you let it)

So, there we were, day of the show and being followed by reporters and photographers. Marcus was learning his stage places from Geoffry, I watched…

And also a little jealous.

What Marcus was doing and going to do was pretty darn cool. And scary. And cool. 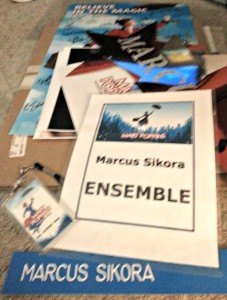 That was three Years ago today. Marcus went on stage as “Kite Boy” and performed WITH the Broadway Across America cast of Disney’s Mary Poppins.  Not just a rehearsal. Not a pretend. Not a Meet-and-greet. He walked on stage, acted and sang with these stars of the stage.

If you missed out on how we got there, check this out.

Between his scenes (he was in two) and before curtain call we sat on a staircase backstage.

My one and only truly anxious moment was when Marcus refused to go downstairs to his dressing room. REFUSED. What was I going to do?  I wanted this to be easy on everyone and the theater folks were trying to shuffle us back downstairs.

Marcus would have none of it and thankfully, I or he – I can’t really remember – maneuvered us to a staircase far off stage and in a corner.  A staircase that went up that no one was going up. Can’t we just stay here?  I asked. We seemed enough out of the way but still within view of the backstage action.

It was a compromise that stuck. Whew.  And Marcus was right, by the way, why would anyone want to be so far away from the action?  From there we could chat with the actors passing by, we could hear everything going on on stage, and we could see the main stars (Bert and Mary Poppins) go in and out of their dressing rooms for costume changes.  Marcus was right, this was the place to be.

Can you imagine?  Imagine hearing “Anything Can Happen, if you let it?” while sitting backstage with your boy who is living out a dream come true? Pretty Freakin’ Amazing.

Everyone we met was kind and helpful. Especially, of all people, the children who played Jane and Michael. So enthusiastic and encouraging.  That day and night was full of so much that I struggle with words. Maybe next year I’ll try again.

For now I want to leave you with two things. First – Pictures and video from the press. Personally, I think they did a great job: 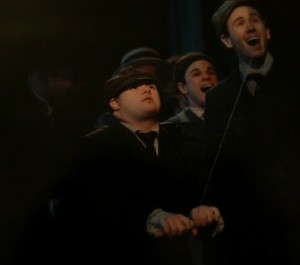 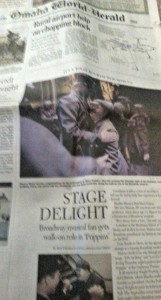 The second thing is this: This isn’t the dream’s end. This is the beginning.

The TV announcer said this was a “once in a lifetime” chance, and he’s right.  But There will be more opportunities for Marcus as he pursues the life of his dreams. We will find them and he will take them.  While we sat backstage and Mary Poppins sang about dreams and stars I knew, this is the beginning of his anything not the end.

Down syndrome and Anything Can Happen (if you let it) – Mary Poppins is right.

Feel free to leave a note and come back around, too 🙂
For emailed updates, not too frequently, Join the Club Here.
Mardra2015-06-10T16:37:10-05:00Categories: Grown Ups & Downs, In the News|Tags: Anything can happen, Down syndrome, Dreams, In the News, Marcus in the News, Mary Poppins|2 Comments