Why do you think people get drunk before they do it?

Often, the moments I like the best is when a group of several singers take the stage and “rock out,” both on key and off. I can tell you, it’s unusual that anyone who actually knows the song is holding a microphone. But they smile and dance and sing their hearts out. The sound can be, let’s say – off – but the festivity, the merriment of the moment is palpable. I love to see it.

The fact is I like to witness people having a good time. I like to watch happy.

Sunday we went to a great karaoke party held by a local organization, The Ollie Webb Center at Mic’s Karaoke Bar. Ollie Webb Center is kind of a hub for several educational, social, and vocational resources for adults with disabilities.

I don’t think anyone had to get drunk to sing. In fact, it’s possible I was the only one drinking alcohol. But there were still shenanigans!  There were groups singing and laughing on stage.  There were nervous folk who sang so quietly you never heard them over the music. There were performers who hit the high notes. There were some who took the stage and danced and swayed and rocked every song. In fact, we had both Elvis and Weird AL impersonators who knocked out socks off!

I think everyone there laughed, danced, and sang their hearts out. 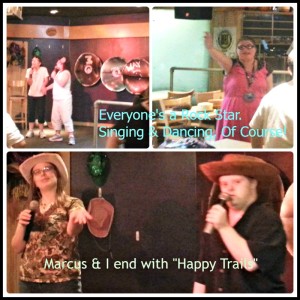 I commented to my friend while we were there. “No one here is doing anything different on stage than what happens on a typical packed bar night. Everyone is hamming it up, dancing, singing…but if we were at a packed bar night, could they be themselves freely? Even though this is all part of the human experience?” Sigh. I don’t know.

But I do know this – we did have fun in these moments.  I hope we can do this again.  Everyone needs to let loose, sing and dance sometimes.

I’m going to close this with a song I include on every mix-tape I make (ask Sam, she’ll confirm).

We’re never gonna survive unless we get a little crazy. “Crazy” by Seal

I’m gonna party with Marcus’ new friends again. They know how to get crazy 🙂  You know what, I give you permission to turn up the volume on your computer, take 4 minutes, and get a little crazy yourself!