My fellow Council Members: I stand before you today 50 years after the inaugural Finals program when I myself was 10 years old, to discuss choosing the age bracket for an additional Final culling of atypicals. 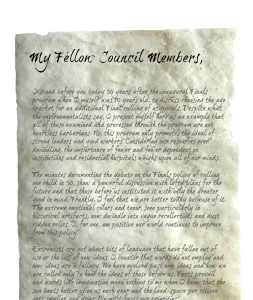 Despite what the environmentalists say, I present myself here as an example that all of those examined and processed through the program are not heartless barbarians. No, this program only promotes the ideal of strong leaders and good workers. Considering our resources ever dwindling, the importance of fewer and fewer dependent on institutions and residential hospitals weighs upon all of our minds.

The minutes documenting the debate on the Finals policy of culling one child in 50, show a powerful discussion with lofty plans for the future and that those before us instituted it with only the greater good in mind. Frankly, I feel that we are better today because of it. The extreme emotional colors and tenor, seen particularly in historical artifacts, now dwindle into vague recollections and dust ridden relics. I, for one, am positive our world continues to improve from this policy.

Extremists cry out about bits of language that have fallen out of use or the loss of new ideas. I counter that words do not employ and new ideas are a fallacy. We have evolved past new ideas and now we are called only to hone the ideas of those before us. Facts prevail and words like imagination mean nothing to me when I know that the sun beats hotter upon us each year and the land-space per citizen gets smaller and drier. We must focus our priorities!

None of you here would deny the effectiveness of Finaling the 10 year olds. Weeding out one atypical per every class of 50 based on a comprehensive Final exam has prevented our world from complete collapse. Ridding the land of those who inevitably only burden our society at age 10, when children have either shown to bloom or plateau, is dead on. Also, it was only 30 years ago that fellow council members, some of which are still on committee with us here, made the brilliant suggestion of not only including the student’s test results in the Finaling, but also requiring all the classmates to name the most atypical student of the room as part of the exam. Thus including their own vote as to who will not move on into their collective adult futures. This addition proved highly effective. First by encouraging the children to begin designating leaders and followers at surprisingly young ages. Additionally, by reducing the number of atypicals at a more rapid pace as they weed themselves out organically.

We all know that every individual must be accountable for the greater good. I, for example, come before you as a thinker and leader. Others must work and provide. And those that cannot do either, well, it is with those in mind that the proposal of a second round of Finals be instituted. A necessary course of action. Up for discussion today: At what age should a second Finaling occur?

The first suggestion is that a preliminary Finals occur earlier, in order to eliminate the borderline atypicals and even catch ineffective typicals that should also be culled.It has been over 100 years since genetic studies have prevented live births of those with known mutations, but somehow there is an occasional live birth of a trisomy or other defect, eluding the scimedical community. There are those who have claimed these children are miracles and should be treated with care and kindness. Personally, I do not honor a miracle that does not work productively. And to the case of the environmentalists, isn’t it a more compassionate measure to weed out these atypical children at age 6 or 7? Before families become connected to them? Those that can even have connections, I mean. Isn’t it better to reduce the burden on the community sooner rather than later? As a point of fact, I am told by classroom instructors that the children usually recognize and begin isolating the atypicals as early as age 4. Why should families be forced to endure the consequences of having an atypical child with no chance of assimilating?

There are other strong arguments for the second round of Finals to come after the age of 10, as well. Accidents, viruses, or other acts of God, affecting the body and mind from 10-17 can prevent one from being as productive as required for community survival. As you may recall, in the Finals debates 50 years ago, the greater party did succumb to the request of the environmentalists that anything debilitating that happens after the cull does not doom a citizen to death. Those who make it through finals continue on in society as best they can offer. And we, in turn, still have institutions and residential hospitals housing affected citizens. There was no mention in the agreement, however, about a limit on the Finals process.

I admit, on paper these measures have not ensured the rise in productivity that was hoped for 50 years ago and that resources continue to dwindle. I argue that this is because we must become more aggressive in this policy and am calling today for us to take action. I bring this to vote before the council and am open to debate on the matter, completely within this room of course. Shall the Finals eliminate another one in 50 at age 6 or at age 17?

Let us prioritize the survival of the worthy and vow to continue our evolution into a purer race.

*One follow-up for our next meeting,
I purpose we discuss eliminating the ban on voting rights for persons over the age of 65.