Life is full of stories and inspiration

Combine that with my stubborn nature, and sometimes there will be a story that I am unwilling to change. This story is a fine example of both. There were three bits of “real life” that collided to combine the elements for this story. The most unbelievable bits, those have come from true life.  My decision to not pull those bits from the story make it mine; they also make it difficult to sell.

So I won’t. Instead I am giving it to you for Free!  It’s been over a month since I’ve given you some fiction. SO here you go, enjoy this short work and know there’s more truth to it than you may think. 🙂

Lane’s phone vibrated from within his inside suit pocket.

He shook his head No, and replied, When

“Family emergency. Tell Bill,” he told Joyce as he walked past her desk.

“Alright,” she said, “I hope everything is okay.”

Outside, his pace quickened. The sky’s colors mirrored the ominous green and orange clouds rolling through his mind. He reviewed every terse conversation from the last few months while speeding home. Yes, he admitted, I looked too long at Chelsea from the gym. Rose caught him, with that look, as she put it. But, it meant nothing. Really! So many short, terse, sarcastic words passed between them lately. She seemed moody and he, well…he didn’t help, let her wallow if she wants. The frustration he felt ran smack into a growing panic in his throat – she’s leaving.

He pulled into the drive behind her car, still here.

When he stepped outside, the air and sinister sky demanded his attention, as did the wail of the tornado sirens, building momentum before achieving the volume necessary to reach the self-absorbed mortals reluctant to heed the warning.

The growing darkness moved in from the west. He furrowed his brow at the angry charcoal wall cloud that rotated and then dropped a funnel from the sky before his eyes.

Like from a trance, he shook himself awake and bolted to the house. Leaving the keys in the lock of the open door, he rushed in calling, “Rose!” His mind filled with the rotating storm barreling towards them. He tripped over her suitcase and fell against the wall, knocking their wedding photos into crooked patterns. “Rose!” He called again.

“Laundry Room!” she snipped. The sirens warned just over the sound of the television, the chattering women ignorant to the weather ticker moving along below their feet. She stood ironing; his crisp shirts hung to her right.

She always ironed during storm warnings.

He grabbed her arm and pulled. The iron dropped and hung over the board, not reaching the floor. “Jesus, Lane, what is it?”

“The storm,” still pulling her along.

He opened the door to the storage under the staircase and threw a few boxes out into the hall. She stared at him. His brain swirled and his breathing quickened, “In here—”

“Rose,” his voice stern. It felt like his father’s voice boomed from him. “This one’s not gonna miss us. Get in.”

Her eyes widened. She scooted into the small space, pushing and crushing boxes with her feet, kicking up the dust of undisturbed years. She curled up her knees to make room for him to crawl in behind her. “I love you,” he said and wrapped himself around her. The sounds of the sirens, the TV, and now rain melted together while they waited. 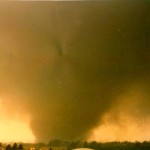 First came the rumbling. The giant wind shook everything and the walls cracked. They neither whispered nor screamed inside their private black hole. Then every noise became part of the one enormous fury descending. The windows that blew inward and the dishes that crashed outward, the walls that ripped away and the plucking of furniture and trees like weeds to be pulled from the earth, all happened in comparable silence to the great roar of the tornado’s winds.

After those eternal minutes passed, came nothingness. No TV. No sirens. No traffic. Only the loud beating of their two hearts filled the darkness.

“Well,” Rose’s voice, barely a whisper, broke the stillness softer than the rain, “I guess I won’t be going to my class reunion.”

Lane realized, the class reunion. She had been tormenting herself with a solitary out-loud debate, to go or not? Her class reunion, her decision to go. The pressure that built up within him released an audible sigh of relief.

“Thanks for coming home,” she continued. “Though, I’m not sure what’s left of it.”

He nodded. “Do you think we can start over?”

They pushed open the door and came out together from under the rubble.

The winds, both random and selective, picked up roofs, cars, and trees and threw each back to the earth in pieces. However, the tornado did not destroy everything.

Rose cried out to Lane “Did you do this?” she asked.

He shook his head, eyes full from the gift.

The tornado blew their wedding photos, undamaged, into the refrigerator, although it stole away the wall behind it.