And now a snippet from The Innocent Prince Series 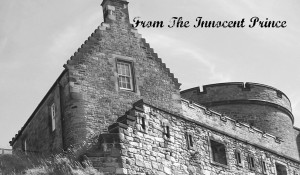 The Queen lay exhausted from the toil but still alert enough to notice the minutes that passed between them. She held her own breath in wait for the babe’s cry. Finally it came, a small burst from the child to claim his place. Then she waited for words of ease from Magdeline.

The Queen’s anticipation ran through a fog of fatigue. Magdeline wrapped the child and placed him in his basket. She completed the process of caring for the mother with swift efficiency. The Queen’s exhaustion overruled her anxieties and she lay for these moments in silence. Magdeline covered her and then attended to the babe.

“Tell me we have a Prince,” the Queen said softly.

“I am anxious to meet him.”

Magdeline nodded, “Of course.” She helped the Queen to sit, fussed over her bed clothes, and urged the Queen to sip from a cup. When Magdeline turned to the babe, she arranged and rearranged his blanket, she ran her fingers again over his small face and finally she laid him in the arms of his mother.

The Queen held her son and understood Magdeline’s hesitance. Millions of thoughts roared undistinguished through the forefront of her mind; she studied the markings of the Prince. Each new thought frightened her more than the last and forced tears to run down her cheeks. She felt ashamed. “You must think me evil,” her words quiet and humble. “I am thankful my son has life and I am healthy to see him.”

“I understand,” Magdeline replied, because the physical characteristics of this child: the way his eyes were set, the slight protrusion of his tongue, the weakness of his muscle tone and the stillness of his spirit; these were the markings of the new Prince.

The sun pushed her soft glow into the room. The Queen looked toward the tapestries that covered the tall stone walls. Dark threads wove stories of battles fought and won. One pictured an archer standing determined from this tower window. As she held her son, the Queen wished she knew not the battle now begun within these drafty walls. She kissed him softly and composed her tears. “The island is in need of a prince. Do you believe his heart will hold?”

Magdeline lifted the infant. She moved her fingers across his tiny muscles; she felt his ribs; she noted the color of his skin and the depth of his breath. The Prince did not cry. “Life’s miracle is in your hands with this child.”

Tears continued to flow from the Queen without a sound. Not born of this protected land, the Queen traveled through many light and dark worlds to reach her destiny here. Magdeline’s words and actions showed she knew these markings as well. The Queen cleared her throat and spoke with decision. “No one will speak of the Prince’s difference. He is the Prince and his blood must give him his strength.” Magdeline’s silver eyes narrowed and she gave a small nod signaling compliance. “Summon Seryne. She will help us to prepare for the King.”

These are something like some of the words that will be included in the forthcoming series about The Innocent Prince.

I share them to both whet your appetite and force me to move forward on my journey to its publication.