The morning we headed back from our “Doctor Road Trip,” I decided to stop at the Waffle House® before hitting the road. If you are unfamiliar with Waffle House® let me lay out the scene: This, shall I say iconic, restaurant chain exists almost exclusively south of Nebraska. It began in 1955 and the design has not changed since, or so it appears. The front is generally all windows with an exterior that has the impression of a double wide  and may very well have been rolled in ready to go. Generally, at least one lettered light is out at any given time on the tall sign out front, I suspect it’s a company policy.

All the food is cooked to order and all of the cooking is done right there, in front of you- if you’re sitting at the counter. Not Genji style. Diner style; with hashbrowns and eggs and steaks and burgers and bacon and waffles.

Now, if you have a kitchen, and I hope you do, and you’ve cooked bacon and sausage and hashbrowns and all of that good stuff, you may have noticed that grease tends to float through the air and cling to any spot it finds handy. Consequently, having an open kitchen may give an air of security to the consumer’s feeling of food safety, you know, by having your pork chops being prepared right there where you can see them fried up, however there are other effects to the overall ambience of the place. Mostly the grease.

Of course the food is good. 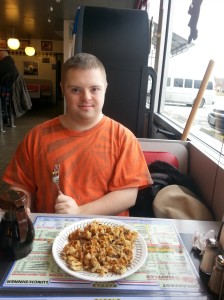 I go for the hashbrowns. Everyone knows that if you cook hashbrowns on a griddle that’s been cooking hamburgers and bacon and all that other stuff, well, they can’t help but be delicious. And then add any variety of your tastes, like cheese and onions and jalepenos…

Marcus, being a bread man, thought he’d try a waffle.

Waffle House’s are surprisingly small inside. Booths line the windows, a few two-seaters and a few four-seaters. Then there’s the counter and stools that separate the customer’s from the grill. On our way to a two-seater booth there also stands a juke-box. The waitress comes over with a smile, we order drinks – chocolate milk and coffee.

Also in the restaurant is the obligatory diner crowd – a few old men sitting separately drinking coffee.  There is also a young adult, maybe teenager, sitting at the counter. He smiles at us when we walk in and lights up when he sees Marcus.  They each give a small wave to each other.

While we were at the doctor’s office the day before, we talked a bit about muscle tone.  Muscle tone is actually a function, or maybe direction, of the brain.  A person can be fit, have good working muscles, but still have low muscle tone because, again, this signal comes from the brain and is not actually an indication of the muscle itself.  I know this is a bizzare side bar that I am clearly still trying to get my own mind around but I mention it now because I am thinking about the muscles in a person’s face. A quick Google check indicates that the human face has over 40 muscles working it. When Marcus was a baby it was explained to me that facial muscles are the hardest to control.  This is why, for example, speech is the first to go when drinking alcohol and also one of the reasons why it is difficult for people with low muscle tone to learn to speak. Those who have frown lines, from working those frowny muscles for years and years, are not perhaps blessed with low muscle tone.  Is it possible, I wonder, if the innocent faces of those with developmental disabilities isn’t in some way related to their facial muscle tone?

What about the young man at the counter’s face showed his developmental delay? He was quick with a smile and had a light in his eyes when you shared a direct look. From the booth I could see he had a pencil and notebooks occupying him. Is there something about the muscle tone of the face that makes one person look more…adult?  I’m struggling with the correct turn of phrase, but I keep coming back to a look of innocence. Do we literally train our faces, exercising all of those worry muscles?  I don’t know.

I must really be getting into this blogging thing, because I haven’t even gotten to the crux of the story yet. OK. The scene is set: Waffle House Diner, Older Guys, Young Adult with developmental delays, Servers scuttling around, greasy air and yummy hashbrowns. Oh, and dare I forget, coffee. Really Good Coffee.

Here we are. Marcus and I are working on a Muppet Show episode staring Brian D’Arcy as Shrek.  (Really great stuff going on, I’ll share that later.) One of the guys stands at the register to pay and the normal back-and-forth proceeds, “Do you need change?” and yadda, yadda. Next thing is more of a hub-bub.  (I don’t know, you get me south of NE for two minutes and I can’t stop using made-up words.)

I cannot confirm the amount because, as is the writerly custom, I was trying desperately to eavesdrop subtly but still get as many details as possible. It seems, the man decided that this day was the day to spread some Christmas love.  And he proceeded to give every server in the place, including the ones sitting at the other counter off-shift, a Christmas tip.  Let’s say it was $20 each.  That’s my guess because every person was substantially delighted, but not weepy.

He was very low-key about it.  He maybe was a regular, but they did ask his name.  I’d tell you, but the thing is, I think this was his personal Random Act of Kindness and those are best left anonomous.   It was a lovely moment to eavesdrop into.  He walked outside, got into his big old-man car, and off he went.

So good cheer followed and chatter among the servers that lasted, oh, a good 5 minutes I’d say.  Then back to business as usual.  Funny that.

Our waitress was kind of a nervous sort, as in I think I made her nervous. You see, I started us off on the wrong foot.  I have a bad habit of answering the question, “Hi, How are you?” with “I’m well, how are you?”

The appropriate American answer in most circumstances is “Good.” Or of course, “Fine” and maybe,“You?”

“Well,” which is correct English, can throw a kink into beginning the relationship.  It makes me sound more hoity-toity and less likely to enjoy the hashbrowns. Then, after the Christmas Tip gesture settled down, I went over to the counter to get more coffee, I should have waited for her to come around, but it was good coffee and as mentioned, it’s not that big of a place, so I took my cup up.

Meantime I sit back down and one of the servers who was now off-shift gives a dollar bill to the young man at the counter. “For the Jukebox.”

By now I have gleened that his name is Mike. (Mikey they called him.) And his mother is working as a server/cook.  He sits patiently working in his notebooks, often? Perhaps. Or perhaps this is just a pit stop.  It seems now there is a booth of people who are ready to take him home with them, grandparents is my guess.

There’s some small amount of protest, but even his mom pleads his case and it looks like they’ll stay a bit longer. So he heads to the Jukebox which is right behind our booth. “Would you like Christmas Music?” He asks us.

He conferred with us a bit about Elvis and made his selections. Marcus was very pleased with the Elvis Christmas song.  “Your son is very nice,” Mike says to me.

“You should go to the Zoo.”

“Yeah.” He picks another song, “You should like this one, Alicia Keys.”

Girl on Fire starts and I’ll tell ya, I never really liked that song before, but coming from the Jukebox in the Waffle House.  It sounded pretty good. Who knew?

It was time to go, we stood and assembled ourselves. We smile at the (presumed) grandparents as we leave, they smile back.

So that was my Best Waffle House experience ever, what’s yours?

Quick reminder, if you want to stay updated with Grown Ups & Downs, just leave your email to Join the Club!