Getting Ready for Halloween

Starting in , well, let’s see, let’s say…November, Marcus begins thinking of what to be for the next Halloween. It changes daily, or more, especially as the day actually nears.

Fortunately he usually settles on something “easy,” lucky for me.

SO here are a few previous Halloween pics: 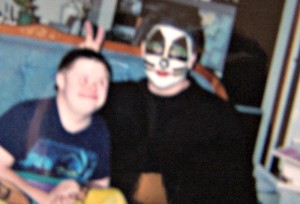 A bit fuzzy, and not Marcus in costume but Quinn, still, worth sharing.

Tonight Marcus Prepares for a Halloween Dance with the folks at The Ollie Webb Center. He L-O-V-E-S to dance. And ever since he discovered “the robot,” well, it’s been all over for any other dance style.

Once, he practically took over a friend’s wedding reception when Styx: Mr. Roboto began playing. Not because he took the whole dance floor, but because he Performed and everyone stopped to watch. He didn’t care, by the way, he was neither invigorated or daunted by the attention. He doesn’t dance for anyone but himself, you know, like everyone says it should be?

ANYway, it’s only logical that he has decided to go AS a Robot to the Halloween Dance this year.

SO here we go!

And here’s a note from a few other folks who love Halloween: