Go ahead, piss me off, it’s your right 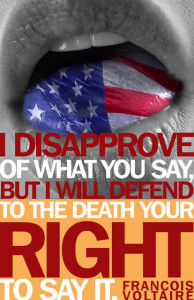 Ok – I’m going to go ahead and go on this rant, because I’ve been thinking about it a lot lately, I’m awake and because Texas has pissed me off.

That could be the start of many blog subjects, eh?

The crux for those of you that want the short version is this: I’m glad to live in a country where it is your right to do and or say stuff that I wish you wouldn’t.

I wish the word retarded didn’t become a hate slur. And it is, so I wish celebrities, politicians, and my co-workers, would stop saying it.  The caveat for celebrities is that they make their money making people laugh, think, nod, fight, cook…whatever, and when those watching say to the celebrity, “Quit it or we won’t pay you (via not watching, laughing, eating, whatever)”   The celebrity is forced to choose, “Hmmm, say this hateful thing or keep working.”  That’s capitalism and I like it. And if the kid down the street wants to say it, he can. And I can remind him that “Words have power,” and, “Is that who you want to be?”

The crazies in Missouri that are full of hate and spew it for a living.  I REALLY wish they didn’t. Is it their right? Sure. Jerks can be jerks if they wanna. (Great little imaginative story of what happens when they die, btw).[1] And thankfully other, non-jerks, can come from unlikely sources to help out. (As seen here[2] – thanks Kelly for these.)

I really wish abortion was rare. I wish it was a last resort. I wish women of all ages had available to them and took precautions to prevent conception instead of finding themselves having an abortion. I wish everyone who got pregnant had the desire and the resources to love and raise their child.

But…this is not always the case. Women have to make this difficult decision and it is and must be their right to do so in a safe environment.

And not only that, Texas I’m talking to you, I want to live in a country where –  when the rules are threatened and people stand (literally) against threats, the people must be heard and most importantly, the lawmakers must be true to the rules they themselves set into motion. Now, as aforementioned, it’s late and even in the Texas Legislature, no one knows if the vote was handled legally yet or not. I’m sure it will all be clear in the morning and my Twitter feed will be split with disgust and admiration.*

You will hear me speak up about abortion again, fair warning. Because, in short form, I especially wish that parents who conceive on purpose, women who want a baby, would stop aborting because the child has Down syndrome, or dwarfism, or the wrong eye color…

But, as warned, I will discuss this more later.

So, what do you wish folks wouldn’t do, but agree they should have the right to?

Personally, I want democracy to be true to itself and to its people foremost. Texas?

And here’s your update:

BREAKING from Texas Senator @TxChuy: #SB5 was timestamped at 12:03a.m. Vote was taken late. No getting around that.