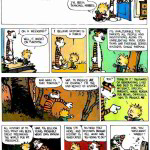 Bill Watterson created Calvin and Hobbes, I am a fan.

The weekend over-the-counter science confirmed my pregnancy, this cartoon ran in the paper:

Hobbes: On a weekend?

Calvin: Well, it wasn’t on purpose.

I believe history is a force. Its unalterable tide sweeps all people and institutions along in its unrelenting path. Everyone and everything serves history’s single purpose.

Hobbes: And what is that purpose?

Calvin: To produce me, of course. I’m the end result of history.

Calvin: Think of it, thousands of generations lived and died to produce my exact specific parents, whose only reason for being, obviously, was me. All history up to this point has been spent preparing the world for my presence.

Hobbes: So now that history has brought you, what are you going to do?

The last panel of the strip shows the two sitting in front of the television laughing as they hear, “You wascally wabbit!” And the two friends laughing it up. 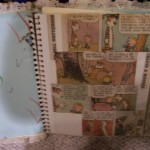 This cartoon was carefully kept from that newspaper and, about 9 months later, placed as page one into Marcus’ Photo Baby Book. The world has been, as Bill Watterson prophesized, preparing for his presence and the next logical step is to get ready for the history he is making. Stay tuned…

**I originally shared this in Oct of 2013. Today I am working on a presentation and I’m thinking of starting with this cartoon. It inspired me to share the story with you all again, too. 🙂
Mardra2014-07-31T07:39:16-05:00Categories: Grown Ups & Downs|Tags: bill watterson, calvin and hobbes, pregnancy, purpose|1 Comment