How Alike Do We Have to Be?

In about 5th grade I thought, “I hope when I have a daughter she’s not too pretty. Pretty girls…they don’t understand anything.”

In fact, when I was pregnant, of all the things I feared, I feared having a daughter.

I had one big birthday party when I was 6. It was a whopper, my whole grade was there. We ran across the lawn with raw eggs on spoons. There was a huge array snacks and more games. A long table made of planks and concrete blocks, perfect for 6 year olds to fit around. The radio was on while we had cake and the DJ dedicated, “Puff the Magic Dragon” to me at just the right time. It was nuts.

The next birthday party I had was at 16. It was also great.

In between, I don’t remember ever going to a classmate’s birthday party. Did I go and forget them? or was I never invited?

Honestly, could be either.

I don’t take friendship for granted. It’s precious and frankly, kind of hard to come by. I’m not going to sugar coat it, my self-esteem is absolutely connected to friendship. That connection saved my life.

Years ago, I did a writer’s prompt and blog–hop around the word Normal. One of my friends burst out, “Normal? How boring! Who wants to be normal.” Ahhh, she is so awesome.

There’s a campaign called “More alike than different” regarding Down syndrome. This is one I could never really get behind. Not that I mind it. It’s fine and PC and all that. (I’m not criticizing, I just don’t relate it to our world.) And I know many people have a primary desire to “fit in” to be “alike” or worse, “normal.”

They also want this for their kids. My heart broke reading this blog from Dave Hingsburger, “All. Of. Him.”  In it, a mother he encounters wants normalcy for her child, more able than disabled. She’s probably a big pusher of the be normal vibe at home. Puke.

In movies/stories, we see this craving by Fiona in Shrek or Hiccup in How to Train Your Dragon.  Of course, those are good ones (to me) because these heroes learn to embrace themselves for who they are and reject the “normal” in the end. My favorite characters, however, are more like the Adams Family, who are their own “normal” and they own it.

At this time of year, it is common for me to rant about Rudolf and how his father pushes him to be like everyone else, even Santa is an asshole. The point for the moment is this: I always identified more with the misfit toys and the (dentist) misfit elf.

I get it. This is a genetically ingrained because survival is based on acceptance. Old days cave-men tribes: “Feed, protect, and allow only those who are accepted by the tribe. Without the tribe=dead. Evolutionary and all that. Survival is, well, let’s say important. Got it.

In my opinion, no one should have to be, or feel the need to assert, they are “More Alike Than Different.”

But that’s the way Quinn, Marcus and I roll. We are a bunch of weirdos. Eccentrics. Artists, ya know? We are cool because of our differences. We often feel just on the outside. We belong to each other, some days that has to be enough.

My wordcloud of thoughts on me and belonging… 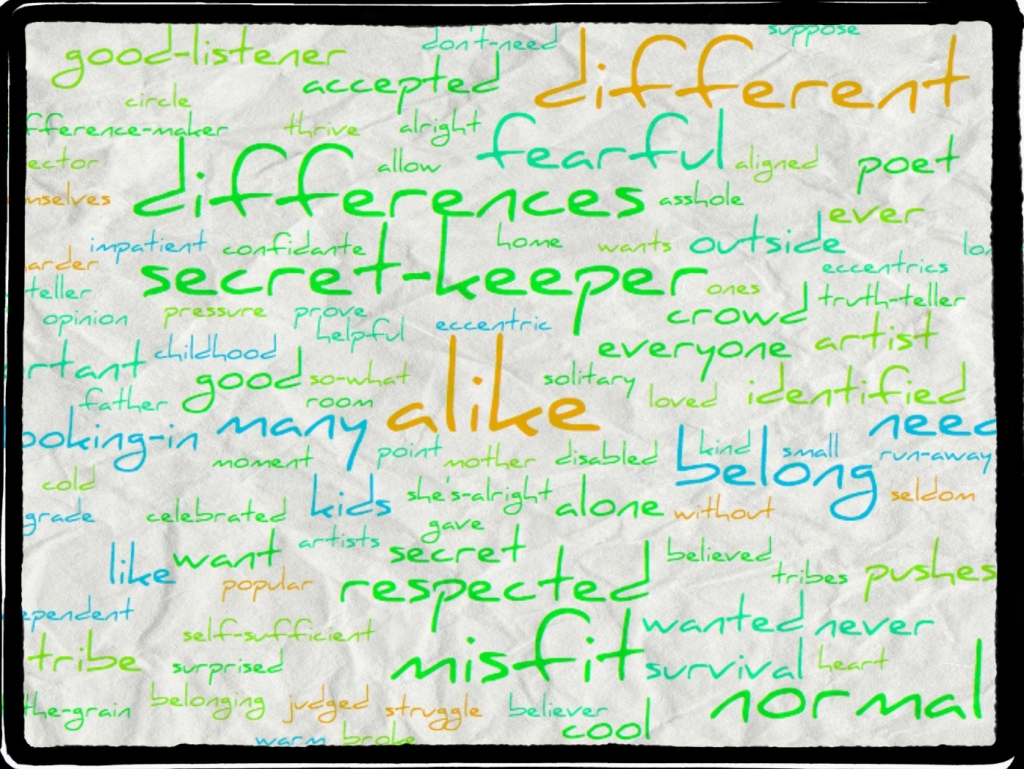 This has been a part of Finish the Sentance Friday with Finding Ninee. This week is about belonging…I wanted to write something really great and I ended with a rant. Ah…such is the way.