How to Get a Good Tip

Today’s PSA for the Service Industry:

Starts with a story…

“Would he like a sippy cup?” The hostess asked as she led Marcus and I to a table.

“What?” I asked. Surely I didn’t hear that right.

“Does he need a sippy cup?”

“You mean this young man with the attractive 5 O’clock Shadow? No. He does not.” 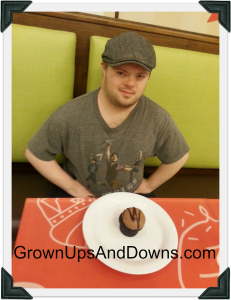 Marcus and I like to go out to restaurants and coffee shops. Being the “work club,” we take that time to work. Generally, I sit with my computer or notebook and he too sits with a notebook.  Generally, he draws in his notebook. Recently another server asked, “Would he like a coloring book?”

I turned to Marcus, “Would you like a coloring book?”

Generally, we sit in a booth (his preference if there is one) and he draws characters from the next Marcus the Musical that runs through his mind.  Sometimes I break from what I’m working on to tweet on @marcusmusical one of his flashes of inspiration. But that’s not what we’re talking about today.

Today we’re talking about what it takes to get a good tip when serving an adult with Down syndrome.

#1 Speak to Marcus, not about him. Look at him when asking a question and listen for the answer.  It is OK to look at me if you don’t understand (for translation) but it’s better to think it through, repeat what you think he said, and clarify – to him. It’s true, his speech can be difficult for a stranger to understand, and requests like lemonade (his current beverage of choice) is trickier for him to articulate than most people. However, not impossible.  I’ll talk more about language later, but today, let’s focus on the obvious. Show respect to the young man I am dining with and your tip will be better.

Now, if you want more than a good tip, follow with me on this: When you look right at Marcus, speak to him, then listen, this guy will repay you with praise and joy. He will likely invite you to his Broadway birthday party. It is not unusual for him to tell you, “You’re the best!” with a thumbs up and a smile that, if you take the moment to soak it up, brightens any day or night. In fact, check out this story where we made new friends.

In my experience, it seems that people who already have a personal connection with a person who has a disability, they get it.  They are the ones who look at Marcus with respect and give him the courtesy of their attention. They know Marcus is his own person. I assume it is the people who have no family or friends with a disability, they are the ones asking about sippy cups.

By the way,  I didn’t really reply with the 5 O’clock shadow remark.  I just said, “No.”  I try to be well behaved in public even with those who don’t understand. I leave the teaching to Marcus, it’s one of his strengths.

My son, an adult with #DownSyndrome , does not want a children's menu or need a sippy cup. This is today's PSA for the service industry. How to get a good tip: Click To Tweet

What about your family? What makes a server stand out from the rest and garner a really good tip?

*This #TBT was originally posted in April of 2013* Thanks for stopping by!  Please,  leave a note and for emailed updates, not too frequently, Join the Club Here