About seven years ago, the first warning sign that my mother wasn’t herself was her inclination to comply. She would ask permission (it seemed) for small, simple things. She’d look to her husband, “is this OK?”

It pricked my senses. What was happening?

I didn’t see in him as desiring to control her. They had already been through her first round of cancer together. He took on his new role and became caregiver. It didn’t make sense.

No. This was something else, this was the first symptom of Alzheimer’s settling in. Dementia has many starting points, and in her case many strikes to set it up, the change came almost immediately after radiation treatments. She was confused and now constantly needed his (or someone’s) ok, she needed reassurances. This was not the woman I knew.

As much as it annoyed me, I encouraged this new personality trait because it would prove to be better for her when finding caregivers. Stay funny, stay positive, and be compliant- this will keep you in good favor with nursing staff. This will help people to forgive other nuances. Don’t turn mean and grumpy, they leave those folks for last. Compliance can be a life-saver in an institutional setting.

Last December, about the 16th, she had an emergency room visit because of the pain. The new cancer caused her a lot of pain. I was still angry with her then. 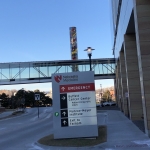 It was the December 29th emergency room visit that everything changed. My anger at her replaced itself almost in an instant with a new weirdly final sense of resolution. I didn’t say it to others but from Dec 29th on, I knew this was her body dying, and her mind/soul/stubborn-non-compliant-child-self saying she wasn’t ready yet. Maybe I wasn’t ready yet, either.

My anger found other targets. My tasking-self still played along. I talked “arrangements,” I gave updates, but my heart knew my role now was simply to accompany her transition and watch. It should’ve been to hold her hand, to guide her gently. I did what I could, but I regret it was less gentle than a life deserves.

At the end, she had one long weekend of non-compliance. On Thursday February 21st, the doctors asked if she wanted to continue the repetitive treatments that were becoming less effective with each invasion. In her compliance mode, she said OK.

I changed the question for her: “Do you want to have another bronchoscopy, where they put the tube in your lungs?”

She emphatically said, “No.”

I said, “Would you rather stop the treatments and drink tea, instead?”

“When her oxygen drops and breathing gets difficult,” I asked the doctor, “How will you control the fear and anxiety?”

“What?” Motioned my mom.

“If there’s discomfort, they will give you morphine,” I repeated loudly.

Mom gave a thumbs up.

The first thing she took control back with: drop the blood pressure cuff. She hated that thing. Next up, good sleeping pills.

When I arrived on Friday morning she was asleep. When she woke up she said she had slept well, all night. It was the first time I had heard this from her in, forever.

At some point that morning I mentioned I did not sleep well Thursday night. She asked, “Why not?”

Now, the staff gave her the wheel.  Yet, I still parcelled out the liquids. She wanted to drown herself immediately in hot tea with honey and wine slushies. It was typical her, heavy foot on the gas pedal. Friday, I still kept my foot on the brake.

I told her, “You’re trading tea for oxygen, is it worth it?” As I watched her O2 levels plummet with each sip.

I told her we had to break, for me.

She said, “I understand.”

Friday’s doctor said, “This is the happiest I’ve ever seen her.”

On Sat, we settled in. She was less frantic with guzzling her drinks and I left the cups to her.  We had tapioca pudding.

She chose to skip medications with side effects she didn’t like. Sat afternoon she asked them to stop the nutrition through her feeding tube.

There was a blizzard that weekend, I brought my overnight bag and stayed in the room recliner.

We watched a lot of movies in those two months. It was a Harry Potter Marathon on that last Friday and Saturday, then a TCM Sunday of musicals. Monday afternoon we watched The Goodbye Girl.

There weren’t any shared secrets, apologies, or goodbyes. There weren’t even many gentle words, really. It should have been more, I wish I could have been more. But the struggle behind the stone wall inside my heart didn’t allow me to be more. And her refusal to face anything hard or consequential stayed a common trait to the end.

I remained stoic alongside her and direct with the doctors. I cried in the car.

She was only conscious until the Monday evening of her last long weekend. When I arrived Tuesday morning, I could tell by the staff reactions to me and coded language… I wasn’t so stoic that day. In fact, I looked like a puffed up tomato from letting tears seep through and trying not to.

Her breathing continued until 5:15, which was longer than I expected.

Now…actions, songs, movies, and stories that used to comfort me are mixed threads of grief and guilt and remorse and wishful thinking for a world that wasn’t. Never was.

Watching someone die, and I don’t mean the end only, I mean watching those months of struggle between living and death and fighting and not really living at all. To be honest, it feels like part of my own life has been cut. The phrase, “Took years off my own life” feels apt. Each heavy step in and out of the hospital, each uneasy decision, each minute in those recliners and lordy, each sip of hospital coffee – I cashed in minutes that will be paid with interest.

My own doctor reassured me that the guilty feelings that come with “getting your life back” are normal, processional, and should be forgiven. I am not having an easy time taking “my life back,” at all.

I read a quote yesterday, for the people “between stories.” A poignant and personal blog, “The Space Between Stories” by Lisa Rankin, which is, in fact, a reference to a phrase coined by Charles Eisenstein in The More Beautiful World Our Hearts Know Is Possible.

We writers are nothing if not builders upon one another’s thoughts.