Independence and Walking Around the Block 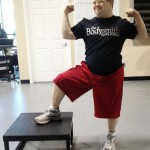 We’ve talked about how important movement is to brain health. And as you may have surmised, we are Americans. Americans don’t like to move much, or even if they do like to move, they don’t. Most of what we consider productive is done with minimal movement. Some people use movement as part of what entertains them, those people do not live in our house. In fact, whereas we may like some of those people, we certainly don’t understand them. So – the point is getting Marcus to move every day is important, but doesn’t come naturally.

Now that the weather has finally turned from winter. We had about 10 minutes of spring and now it’s summer. So about a week ago when I suggested to Marcus he could “Jump” (jump on a small rebounder we have in the living room – excellent for many health reasons I‘ll get back to) Or we could take a walk. Marcus then said he wanted to take the walk option, but himself. This is when we change the subject from exercise and brain health to independence and over-protective parents.

I’ve never let Marcus take a walk by himself.

I barely let him out of my line of vision. Ever. Whose fault is that? Mine.

Back up a few months to the High School State Football tournament. My nephew was playing, (#20, runningback, yea Malek!) Anyway, another nephew – a much smaller one – was standing several feet away from us adults with a gaggle of other kids down nearer to the field in a less occupied area of the stands, giving them room to clown around in peace.

Did I mention it was freezing cold? Well the anxiety helped to keep me warm. How do people let their kids wander and play together like that? Anything could happen! They could fall and crack their head open, they could be snatched away, they could get lost, alien abduction, spontaneous sinkhole in the North end-zone, the possibilities for tragedy are endless!

Surprisingly, none of that happened. Kids go off, they play together, they get into trouble, get hurt, cause mischief, and almost always come away without anything more than a scrape. Hm. I wonder how that works.

I was super independent as a child. I wonder if I would have been this same over protective parent if my child was not Marcus…but that question is also for another day. Today we’re talking about a walk around the block.

So, when Marcus and I went for our “short walk” – this is a walk around the block across from ours which is a smaller block and a slighter hill (thankfully) after crossing the street to the short block I said, “How about you walk that way, I’ll walk this way, and we’ll meet in the middle.”

“Yup.” He says and starts to march/jog on his merry way.

I walk the other way and immediately begin to calculate who to call first to help me find Marcus if I didn’t see him at the middle mark. I begin to negotiate with the police on how urgent the need is to find my son. I calculate how long it would take for my husband to get home, and if he would be safe to drive with this emergency on his mind. This all plays in my head until I see the happy march of Marcus in my line of vision. I did not make it nearly as far as he did, although my heart is racing.

I do not continue around the other side of the block, I turn and follow Marcus – a few steps behind, for the rest of the way home.

Who’s not ready to walk alone around the block?

We’ll keep working on it.

Parenting is hard – How do you keep from overprotecting your child?

Thanks for stopping by, feel free to leave a note or
for emailed updates, not too frequently, Join the Club Here.
Mardra2014-06-03T14:05:03-05:00Categories: Grown Ups & Downs|Tags: independence, now, over-protective parent much|6 Comments