What I’m really trying to say is…

This was originally posted once before, I’m offering it up as my contribution to Downs Side Up’s Linky because it sums up what I most want to say to other parents of children with Down syndrome. What I hope that Grown Ups & Downs shows them when they come around.  As always, dear Hayley, Thank you for asking 🙂 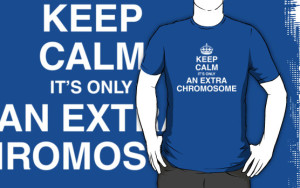 This summer Marcus and I took a “Theater Road Trip.” We had a great time, it was a good idea. Here’s a moment from the first night at dinner after the show:

While Marcus and I enjoyed our dessert, I watched the family that came in shuffle into the booth caddy-corner from us. The family wore full T-21 regalia. I assume they were at a function of some sort previous to dinner as the oldest son, who looked to me to be an early aged teenager with Down syndrome, wore a “Keep Calm it’s only an Extra Chromosome” t-shirt and there were two other children in the family, with at least one was wearing some other sort of supportive t-shirt.

It was late for a family dinner, I’d say about 9:30ish. Consequently the parents looked really worn out. I smiled at the boy’s “Keep Calm” t-shirt. I caught the father’s glance, or maybe he caught mine, I smiled and said – “Nice shirt.” He nodded distractedly as the family tried to settle in.

Alright, back to us. I said to Marcus, “I’d like to say goodnight to the people at that table when we leave.”

Unless it’s via written words, I’m not great at talking to strangers. If my husband was there, we’d probably have stayed for a whole ‘nother hour and not left before knowing the names of their children, their pets, where they go to school and what their favorite kind of pizza is. I’m not as good at all that.

So we stood to leave, Marcus put on his “handsome” jacket and his hat. We walked to their booth, turned and smiled while we said “Good night.” Marcus nodded to them. And out we went.

I looked the mother and the father each in the face. The parents looked at us, they were assessing the situation. We moved on. 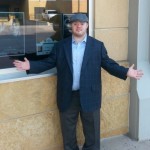 What I attempted to impart to them was – “See? It’s OK. Everything you are fighting for and worried about – it will be OK.  This young man with Down syndrome and I, we’re living life. We’re out to dinner. We’re looking good. We’re OK. I know, you’ve had a long day, but tonight, sleep well. Because, you will be OK, too.”

The first years are scary because of medical issues, heart surgery is usually the biggest. Then there’s tonsillectomies, ear infections and all that stuff that you have to figure out with kids. Those suck since we as parents have no control over it. After that there’s the whole school thing, and for some it’s a bigger fight than for others. But eventually, for us and for many others, that all settles down.

And at the end of the day, after enjoying theatre, road-trips, and dinner, it’s all really more than OK. It’s pretty great.

We love it when you leave a note.  And if you want not too frequent updates, Join the Club!