KETV and Marcus For the Win!

Four years ago Marcus played a walk-on role with the touring cast of Broadway Across America’s Mary Poppins Cast. His first words the next morning, as we looked together at the article on the front page of The Omaha World Herald: “I won!”

Then a few years later, and a few years ago, Marcus bravely faced another situation new to him, he auditioned for a placement as a model for the Global Down Syndrome Foundation’s big Be Beautiful, Be Yourself event. The audition night was an incredible experience, feel free to read that story here, the end lesson to me was when Marcus again told me, “I won!”

Well, I mention these in back-story because he rightly claimed a win again tonight.

Earlier this week he said he was not nervous as he did an interview with the news reporter, John Oakey, from Omaha’s KETV. As his mot 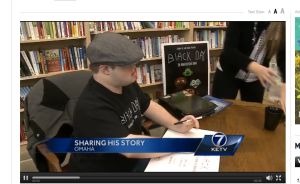 her I can tell you, I didn’t/don’t believe him. To me, he seemed nervous. Even so, we chatted and he calmed down, especially as he began autographing books, which he’s pretty versed at now. ☺

In any case, tonight KETV showed a short feature on Marcus and Black Day and although we were at a Christmas Party, we snuck away just in time to see most of the story “live.” I think Marcus was pleased with the story from his exclamation when they cut to commercial…say it with me…”I won!”

I appreciate John Oakey and KETV sharing this “chapter” of Marcus’ story. I also appreciate Marcus continuing to teach me what winning really is. Winning is about being brave, stepping outside of your comfort zone, trying new things and living to tell the tale. That’s a win, every time.