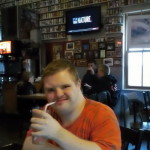 Recently I read a story in a workshop that had a character named William. He
believed that children who were born through IVF had a look to them, like in
the same way that…”children with Down syndrome have a similar
look with their facial expressions. It’s difficult to describe the look without using the word vague.”

He said, “It’s a vague expression.”

I read this and honestly, it’s something I’ve been pondering. I admit, I nag the boy. I tell him, “Stay present.” “Stay with me.” “What are you thinking about?” I barrage him with questions when we are headed somewhere public or in public.  I want him to look present.

A few days ago, while sitting in the audience getting ready to see a show, I went through this routine while he stared ahead of him. He said, “Thinking Mom. I’m just thinking.”

You know…I know you are.

I’ll talk more later about his Busy Brain and The Movie in My Head.  But, suffice it to say, he is thinking. All the time.

Why do the muscles in his face look lax while ours all tighten up in public?  Maybe because he doesn’t care if you’re looking at him. Maybe so many of the rest of us are tied up, busy thinking about looking like we’re thinking, how much actual new creative thought and perception is going on? Not as much as goes up in Marcus’ busy brain, I’ll bet.

Most of the time when I pester him he replies with, “I’m fine, Mom.” Or “It’s fine.” Not with what he may likely want to say which is – “Shut the hell up. Or, leave me be…Jeesh.”

When Marcus was a baby we taught him to not let his tongue poke out of his mouth. “The tongue is a muscle,” another set of parents told me, “and can be controlled.”  Should I be poking him all the time to tense up and look like he’s thinking?  Or should I let him be?

Maybe instead it’s time to leave him alone and let him think and look any way he wants.