When Jen Jacob asked the seemingly straightforward question on Facebook during Down Syndrome Awareness Month: ”What was life expectancy for someone with Down syndrome in 1910? What is it today?” This prompted a short “earful” from me because the answer is not as easy as people are led to believe.

In fact the book we worked on together, The Parent’s Guide to Down Syndrome, a new resource recently released on January 1st, 2016 which is filled with information from not only parents and parental experiences but also a wide variety of trusted resources including current data regarding research, individual medical, legal, and advocate authorities, as well as organizational leaders, but does not include the commonly touted statistic about the average life expectancy of a person with Down syndrome.

The statistic is easy to find. Just a few days ago Down Syndrome Indiana posted

I understand why the “nationals” and local DSA’s report this half-story, it’s not only good for marketing; it feels good. I get that.

When I watched the World Down Syndrome conference at the UN via Webcam in 2012, I listened to doctors speak of the huge advancements in medicine, care, research, and lifestyle changes that have led to the huge leaps and the lifespans of people with Down syndrome. Both the NDSS and the Global, as examples, tell us that the average life expectancy is now about 60 years old. How exciting! Because, when my son was born, in 1990, I read his life expectancy would be 30 years, a huge improvement from only 20 years before.

When my son turned 21, I breathed a huge sigh of relief. I felt like the longest and biggest battles were behind us. Finally, we could sit back and enjoy.

Of course, ever learning, I then found out about two new-to-me issues.

First, the prevalence of Alzheimer’s disease in aging adults with Down syndrome.  Consequently, I have since emerged myself in learning about the advances and discoveries researchers are diligently pursuing, looking for the puzzle pieces to help people with Ds and the general population. This is an area that has and is, thankfully, gaining research funding and attention in the community. The Global Down Syndrome Foundation has, in particular, taken on this issue with the intention of making huge changes via the Linda Crnic Institute for Down Syndrome, as has the LuMind Foundation who are making great strides with research including the World’s First Clinical Trial for anti-Abeta Vaccine Targeting Alzheimer’s Disease-like Characteristics in People with Down Syndrome.

Race and Down Syndrome

Then, an online friend, Celeste Hart, brought the second issue to my attention, the one regarding life expectancies, and it knocked the wind out of me. Check this out:

This chart shows that yes, in the year 1996 the average life expectancy of a person with Down syndrome was nearly 60… for white people.

Other segments of our population were still only living 30 years (black) and 25 for other nonwhites, including Hispanics.

A pediatrics article dated January 2013, provided by the Center for Disease Control states:

WHAT’S KNOWN ON THIS SUBJECT: Although survival of children born with Down syndrome has improved, unexplained racial and ethnic disparities in survival persist in the United States.

Unexplained racial and ethnic disparities in survival rates of people with Down syndrome persist in the USA. Click To Tweet

Those of you that have been following us and have come to know and love Marcus, you should know also that he is a third-generation immigrant from South America and although he looks a lot like the father who loves and raised him, his biological makeup is an American Hispanic with Down syndrome. And his life expectancy is 25 years…

Now, I speculate the second reason the “nationals” (Which I lovingly refer to the large Down Syndrome Organizations that rally, advocate, and inform to make improvements in the lives of people with Ds and their families) rarely mention this disparity is that most of the research on this issue is, in research terms, old. My friend Stephanie and founder of The Road We’ve Shared would agree, it is old, so she suggests that there needs to be NEW RESEARCH ON THIS ISSUE.

We’ve been told, again by the “nationals,” this is an important issue and on their radar. However…I haven’t seen any new feedback and many people in our community aren’t even aware of these facts. Back to the Facebook post from Down Syndrome Indiana – 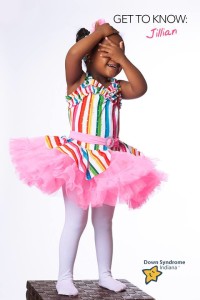 Posted by Down Syndrome Indiana on Sunday, January 3, 2016

Shall I tell them

“Well, maybe…maybe not, for this beautiful ballerina.”

If I do, I’m “stirring trouble” or “being negative.” If I don’t, who will ask for the new research? Who will be the squeaky wheel that a long quality of life is important for all of our community? Frankly, Jillian here is ADORABLE and I WANT HER TO LIVE A LONG AND HEALTHY LIFE. I know you do, too.

Do YOU want to know more? Has this earful got you ready for a call for action? Here’s some good news: the 321eConference (BTW, Act Quick to enter for a chance to win a free registration here), which is held online in March, is hosting a session on this issue. Stephanie will share the research we have so far, information from the CDC, and what advocates can do to help bring about action.

Because one thing is for sure – there are way more questions and speculation than answers right now. Let’s pull together as a community and demand those answers so that we can also, as a community, create viable solutions.