When someone we love is robbed from us, it feels like the world should stop. Actually, it does. For a moment. And we look around us, jealous that others are still living, working and being alive.  – From “A Mother’s Tears“

We are nearing the two year anniversary of the death of Ethan Saylor, a man I never knew, but who has been in my thoughts much since I first read his name. Over the last few months Ethan’s name has come into the press with a few mentions as voices noticed similarities between his death and lack of justice and others, Eric Garner in particular. What I hope the public takes from these correlations is two things. 1) is what WalkersvilleMom focused on in her blog: More Than One Lesson from Ferguson – Independent Investigations Needed. And 2) empathy. I am as guilty as anyone of assuming someone’s intentions, confessed, so what I hope is that these diverse cases allow people to empathize with the human plight instead of divide us yet further. That really is an entire discussion best had with real conversation and not from my little platform. So I’ll stop here, for now.

It seems to me, many issues have come to light since Ethan died. Back then, when I first read about Ethan’s death, one of the first people I ranted to about it was my brother, who replied with, “Nothing will happen to those cops. Nothing ever does.” He continued with, “Just go to YouTube to see tons of videos of cops getting away with whatever.” (I haven’t, by the way, gone to YouTube for this. I trust him. I don’t need to see any more of it.) However, at the time, I didn’t believe that to be possible for this case; I thought that the men involved in Ethan’s death would surely be held accountable. Wasn’t everyone? (I didn’t know then of Michael Bell. My, has he worked hard for change after his son was killed.) Sigh.

This Thursday January 9th will be Ethan Saylor’s birthday.

It was on his birthday last year I “took down” my #JusticeForEthan avatar, swapped it for the #ToastForEthan and then vowed to celebrate his life and legacy instead of continue to mourn and revel in anger, cause really, there’s a lot of anger there. Here. Involved.

I know some people in the community are weary, battle weary as it were. I shared on The Road why we’re still talking, and need to continue, even though it hurts. Although those of us who love someone with Down syndrome know Ethan’s name and the tragedy of his death is forever lodged into our psyche, there are still many people, even within the disability community, who do not know the name Ethan Saylor and what the way he died and the aftermath of events mean for making change. For that reason I sent a blog off this am to the Huffington Post, we’ll see if it can reach more folks and spark some action, support, reaction, who knows…

On January 12th there will be a vigil for Ethan at or near the theater where he died. On-Line we will also hold a vigil, for my part, it’s already started. I invite you join in, use your online presence and light a candle, say a word, spread the news of Ethan’s life and his legacy. 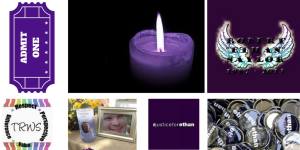 My husband reminded me as I lamented and cursed over the past several days, fighting with words, corralling my emotions, that #JusticeForEthan is more than accountability for three men, it’s about much more, now. So we will remember, continue to rally, and even among it all, hope for healing and hope for better.

If you have found this blog and somehow do not know the name Ethan Saylor, start here, it’s pretty much “Just the facts, Ma’am.”