In the short film “Learning to Drive” two brothers go on a road trip in a Jeep called Bruce, which backfires often and is a gas guzzler. There is a prison nearby. One brother, called Red, is what is known in technical circles as a hot mess. Michael, the other brother, has Down syndrome, is determined to deliver his mother’s ashes to the Grand Canyon, and although he has a strong desire to learn, doesn’t have a license to drive.

What could go wrong?

Good storytelling also brings questions. For example, what happens to a person with a disability after his parent’s die? Why would a person with Down syndrome want a driver’s license? Don’t people with Ds just go with the flow?

Who is Constance Botham?

“That’s our mother,” Michael replies. “She passed away from cancer and left Bruce for me.” (Bruce, as you may recall, is the Jeep.) Red squirms in the hot seat, having been pulled over for driving erratically, may have been drinking, and has evidenced to the audience a few other recent risky decisions.

Are you intrigued? How about a short movie trailer to cinch the deal:

The lead actors in this film are Kevin Coubal and Connor Long.

I was introduced to the work of Connor Long a few years back via the film “Menschen” and wrote an entire series of articles following my viewing of it. The best after-effect was it led to my actual meeting of Connor and our families became quick friends So, with “Learning to Drive,” I was privy to some of the early details, like the freezing cold desert night shootings, the struggles for funding, the delays, and the wins. I’ve seen the film twice on the Big Screen, once in Maryland at the Ethan Saylor Film Festival (where Connor Long won the Outstanding Actor/Actress Award for the Festival), and also in my hometown, because Omaha is cool like that.

And NOW it’s out on DVD – You can see it, too, in the comfort of your own home. Keep reading and I’ll tell you more of why you want, and maybe need, to check this out…

“Learning to Drive” is an example of the powerful way fiction stories can open minds and start discussions.

“Learning to Drive” is an example of the powerful way fiction stories can open minds. Click To Tweet

Have you ever seen a movie that gets real life?

We artists, well writers especially I suppose, have bizarre Google searches. Writers go to worlds they’ve never been, have characters they’ve never met, create worlds within worlds. Also, we use what we do know, have felt, have seen, and throw it into the mix. Roderick Stevens created a fictional road trip and fictional mystery with fictional conflict based on the real-life knowledge and placed it in a what if…

Did I tell you the writer and director, Roderick Stevens has a brother with Down syndrome? The portrayal of the character with Ds in this movie incorporates typical behaviors or characteristics without being stereotypical. It’s the difference between someone who gets it as opposed to someone who’s Googled it.

Many people I know with Ds talk through situations, self-talk, it’s called. As a scriptwriter, that’s got to be a godsend. A quick and easy way for exposition and characterization without the narrator. We see a little of this with Michael.

Another common attribute of people I know with Down syndrome, that is not a godsend for a director, is the habit of keeping their feelings and struggles guarded. You know the term hard-shelled? People who are outwardly cold but once you get to know them they’re sensitive and deep feeling? Many with Ds often get the opposite rap. They show a pleasant, eager-to-please side when they are in public, but beneath that façade, churning many memories and emotions. Most people I know with Down syndrome are close guards of their emotions and the undercurrents of sadness, anger, and the trauma boil underneath.

Then, like the hard-shelled person, when pushed to a breaking point, may cry out, 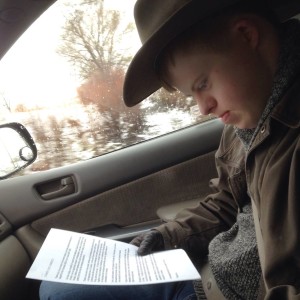 Connor on set of Learning to Drive

Connor Long is not Michael, but he pulled from himself Michael’s character. In fact, he has already been recognized for his acting skills in this film by the Southern Shorts Awards. Both Long and Stevens wanted to tell a story where Michael is a viable, relatable character. How can this be done for the majority of the world who don’t have or maybe even know someone with Down syndrome?

Let’s also talk about the brother character a moment: Red. Red is, as I mentioned previously, a hot mess. Making him immediately likable and relatable. He’s a man who recently made some questionable decisions. On top of that. his mother lost her struggle with cancer. His younger brother, an adult with Down syndrome is now his “responsibility.”

What’s a guy to do but panic? Of course. Who wouldn’t?

Here’s where characterization, hero’s arc, real-life, and my personal struggle…collide

Writers rule: don’t just do to the character. Our character must make decisions, good and bad decisions, for we – the reader or audience – to appreciate, identify, and grow with him.

How to have a character make his own decisions, his own life choices, with a person who is not allowed to go out alone?

How can we expect society, everyone we know, everyone we want to know, to connect and feel empathy for a person who is…not allowed to choose their own road?

Did you just hear that record scratching my brain?

Don’t get too squirmy in your seat yet, let’s go back to the comfy word-world of fiction. Let’s see what Rodrick did to solve the story line conundrum. Well, he realized, for the audience to connect and relate he had to get Michael, our character with Down syndrome – Alone.

This is what we call in the craft, the point of no return. Yes, Friend, I don’t believe it’s a spoiler to tell you our hero goes out… Alone. He does what heroes do. He pursues his own Grail. He uses his talents, his superpowers, he makes mistakes, we…we root for him. We identify with his struggle and his scary moments. He is our character.

And fellow family members, it is scary. It’s worst-case. It’s all the reasons we make up our own minds as to why we don’t allow our children the dignity of risk.

Stevens, the director, said of his real-life brother, “I realized that, at that moment, I was the only one stopping him.”

I am sharing this “Learning to Drive” review and analysis again, today, for two (now three) reasons. The first is that Marcus and I recently gave a few sessions that included short films and trailers as examples of Storytelling as Advocacy, and we talked to the group about “Learning to Drive.”

Marcus explained the pillars of “Learning to Drive as follows:

Adventure – Go to the Grand Canyon

The second reason is because during our writing/working on that recent session, I discovered that a family worries are often, most often, the “conflict” in the advocacy films we found. In fact, in Marcus’ analysis, “Mom worries” came up…repeatedly.

In real life, our real life, it is coming up again, loudly. Am I the conflict keeping Marcus from his next step? Or am I the pilot that’s keeping his adventure safe? As a mother and as the narrator to this journey of ours,  I came across these original themes and movie review today as my own special stalling mechanism. My own, I don’t want to write/think about that so let’s just go back and talk about this…instead.

What does “Learning to Drive” Advocate?

To the masses: a relatable character with Down syndrome. Truth in ambition, in self-advocacy. The connection of rooting for a hero, more like ourselves then maybe we knew before.

To me: All those bits I’m avoiding.

One more piece of the film I loved is the way the soundtrack is used. Especially the single, “Slip Again” by Wake up Joel. It’s perfect and used perfectly in the film. There are many eloquent lyrics, and the vocals are haunting, but the simplicity of this line here:

“Trying to keep my shit straight.

I have played this song about 200 times while I wrote the original review and again today.

Music is so awesome. I can’t speak for what anyone else hears in this, but I hear the fear. Or, as Marcus explained, the “worried-confused.”

So back to the heroes’ quest and the story. Often we find that what our hero thinks he wants and what our hero really needs are not always the same journey, right? When my son, Marcus, and I break down the stories we study, we ask ourselves, what’s the truth? Every good story has a universal truth or two.

The Truths of “Learning to Drive”

We are all imperfect, learning beings. There’s a lot of imperfect beauty and a lot of learning, and for those open to it, a lot of teaching, packed in this short film.

Marcus said the Truth is to “Be Brave.”

Is that truth for Michael? or for Red? or for us all?

Reposting this short essay/review because…

You can see it on Amazon Prime Video 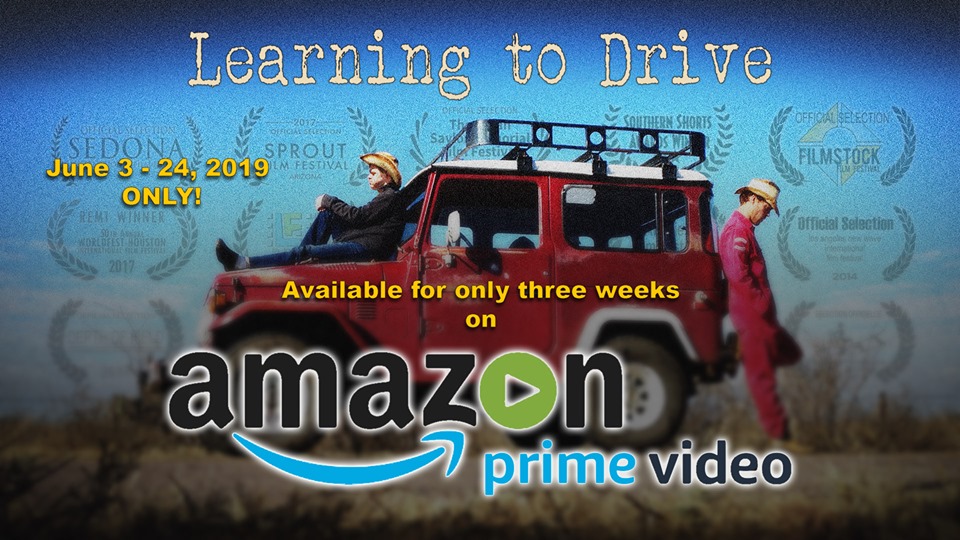