What One Young Man with Down Syndrome Wants You to Understand

Yesterday I learned a little bit about a man with Down syndrome named Stephen, and his mother, who wished he had never been born. I don’t know much except what I read from a tabloid article written by his mother. When Stephen was very young, about three years old he cried in the night, a lot. He cried for many hours because of…Pain? Confusion? The article did not say, it was not his story, it was his mother’s, so we learned that she also found that time to be painful and even, in her desperation, considered killing Stephen as a solution.

After that Stephen spent several years in an institution. Later, as an adult, but still faced with severe communication issues, he was taken onto an airplane where he refused to sit in the seat and put on a seatbelt. I wonder if that seatbelt in this strange situation reminded him of a restraining device from his past. Again, his story was not disclosed, only his mother’s deep humiliation over the episode.

For me, the complete article was hard to read; some commenters commended Stephen’s mother for her honesty in her confession she wished he had never been born, or even that she should have let him die as a child. Another blogger and mother, Walkersvillemom, detailed the article and asserted that as an advocate, sharing stories and their truths are important, even for those who don’t agree or want to see/hear it in “When the Truth Hurts.”

That’s the thing about truth, it can be different for different people. It’s malleable. And as Hayley Goleniowska noted, this mother’s truth came from a different era. 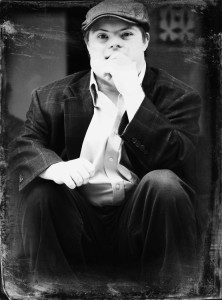 Still, as I tried to sift through the intentions of both the author and the media source, I worried about the potential consequences of such hurtful words and thoughts, and how those words affect someone I care about.

This mother’s words distracted me, I sighed while re-reading the news on my phone and broke from conversation to interact, instead, on Twitter. So Marcus, asked me, “What’s going on?”

Marcus can’t read the news crawl on the screen (too fast and distracting) and limits his Twitter interactions to pictures or words he dictates. I do not want to tell him of these articles, of mothers who feel that their children, who look a little like him, are “better off” dead. That there are people who claim that those with Down syndrome are not worthy of life. I do not want to tell him these things.

But then he surprised me, as he has before and doubtless will again, when he intuitively knew more about the situation than I shared. He looked across the table and said, in his way, “Maken Understand.”

But at this moment, there was no frustration (from him), no other phrase, no other word. So I asked, “Maken understand what?”

Yes, friends, true story. His answer to the situation. There it is.

I stared at him in amazement. Of course, he’s right.

I was angry for the chosen words and for both the stated and implied intention of the media outlet, while my heart broke for Stephen and all of the times he was unable to make himself understood. And yet, my heart also aches for his mother in this, her attempt to be understood. Two separate stories lived together but so far away from understanding. That is pain.

I still desperately want the world to understand that for people with Down syndrome and their families, stories like Stephen’s and his mother’s is not the only story. It is not Marcus’ story. It is not our truth. So we will say again, we wish so, and will continue to try to maken the world understand…love.

I’m reposting this, originally written and posted in October of 2014. I have refreshed it as part of the Love Blog Challenge hosted by Belle Brita. The Prompt for today is “Challenge.” We all have many challenges, but no one sums up the answer to these challenges better than Marcus. The answer is, and always has been: love.

We all have many challenges, but no one sums up the answer to these challenges better than Marcus. The answer is, and always has been: love. Click To Tweet
Thanks for stopping by, feel free to leave a note or
for emailed updates, not too frequently, Join the Club Here
Mardra2019-07-26T19:30:36-05:00Categories: Grown Ups & Downs|Tags: love, Marcus Wisdom Bomb, Marcus' Wisdom, News, now|16 Comments