In my young adulthood, I frequently said, “This is no time to panic…” Often at random moments, to no one in particular, mostly at work.

After reading the book series, The Hitchhiker’s Guide to the Galaxy, then seeing the classic BBC TV of the same name, the simpler phrase “Don’t panic” including a cheeky smirk and a deep sigh is a common refrain in my household.

The first time I recall Marcus purposefully using the phrase “Don’t panic” was a memorable audition night in Denver seven or so years ago.  He was right.

In 2017, disability advocate Meriah Nichols requested an interview with Marcus for her spotlight “Voices from the Disability Community” series. We made this short video in response. I’m reflecting  about this today because of Marcus’ advice to his younger self.

***FYI, this was an early crack at video resources for me, so very important that you click cc (closed captioning) to catch all Marcus’ replies.**

Excellent advice at any time. And, I also think, in just the right order.

Many new-age or even old school therapists, ask of us when expressing hesitation or facing fear,  “What’s the worst thing that can happen?” In order for said person to find perspective on their worries and maybe help them to tackle same.

At the moment, the worst thing, really is worry-worthy. We’re looking at actual or potential loss of livelihoods, (and all the threats to physical and mental wellness that entails), current and further isolation, and illness, potentially fatal illness to ourselves and/or those we love. 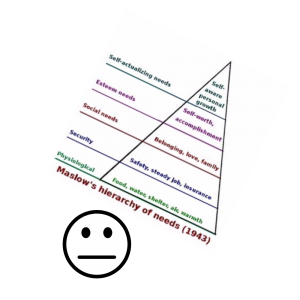 Wow. We are tipping the very base of Maslov’s hierarchy.

Anyone else tired of the word unprecedented? Me too. But here we are, experiencing the definition “in real time.” 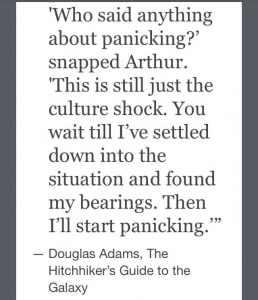 So, step one) Don’t Panic

When we are in a panic situation, The amygdala goes into overdrive and by overdrive I mean in overrules other brain and body signals.

This is sometimes helpful, i.e. automatically knowing to run from a building if someone yells “Fire!” But not always helpful, particularly when allowed to make long term decisions.

Chicken Little called while I attended a conference in March. At that conference, Sara Ross spoke  about these brain issues, emotional intelligence, and conflict management at work.  She has good advice about how to move beyond the quick triggers on her blog. If you struggle with this (who doesn’t?) go check it out.

The crux is this, we’re facing a barrage of reasons to panic, so the first key is…don’t live there. Recognize your emotions. Use words to deflate them, instead of fuel them.

We’re facing a barrage of reasons to panic, so the first key is...don’t live there. Recognize your emotions. Use words to deflate them instead of fuel them. Click To Tweet

I have only one piece of advice; given before and I’ll say it again. Breathe.

Personally, I’ve moved on from the small sticky note reminders on my computer to a breathing app on my phone. It’s call iBreathe and it’s a free with ads ap. It has an alarm to remind me and it’s only for one minute at a time. This last week, I ignored it most days and now my chest aches. Oy. This breathing isn’t as easy as it looks, that’s why I keep telling you (and me) to do it.

Bravery, although technically a noun, requires multiple, varied, and complex relationships between action and reaction. Bravery includes, among other things, protecting others in addition to oneself. It may include standing, sitting, speaking, aggressing, and even occasionally listening in silence.  The (not so) simple act of living is brave.

Right now, bravery looks different from person to person. Mothers staying away from their children. Families not gathering. Working to keep others working. Not saying the first thing that comes to mind. Violence may bring temporary, and sometimes empty, victories. Believing that hate is not the answer. Defending #BlackLivesMatter. Fighting in ways that are new and listening in ways that are not.

To me bravery requires doing what is right. Bravery is an ancient component to the human experience…and its controversies.

“The courageous man is both fearful AND bold, but he is such in the right time, right manner, for the right reason.” MAD Moore explaining Aristotle’s concepts on courage.

“Socrates‘ objection: courage is a noble and advantageous quality; but foolish endurance is evil and hurtful; hence the definition is too wide (192d). NOTE: The point here is that mere daring or, worse, foolhardiness is not courage.”  – From and about the ancient discussions of courage. https://www.siue.edu/~evailat/el6.html

This comes to responsibility. Being human includes a certain amount of power over ones actions and reactions, and therefore we are each responsible for such. Bravery is a choice. Hm…

Winning? Not at the Moment.

This week has thrown me curveballs, fastballs, and screwballs. Metaphorically speaking, I did not hit any home runs this week. That said, I’m still in the game. So is my team. Like almost everyone I know, we’re spending all of our energies avoiding “the worst that can happen.”

To do this, my advice is not metaphorical at all, it’s to listen to Marcus (again): Don’t panic. Stay calm. Be brave.

This has been another join-in with the lovely Kristi of Finding Ninee and Finish the Sentence Friday. The prompt is “Staying Calm” – what do you have to say about that? Join in here.