You know what didn’t cross my mind in those hours after my son was born and nurses spoke in hushed tones while a social service worker hovered outside my hospital room…when certain family members chose to scoff at certain other family member’s expression of love over doom? 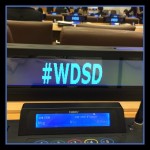 On June 20th, 1990, I did not once think of the UN. And yet, yesterday I received an email from Down Syndrome International inviting Marcus and I to speak at World Down Syndrome Day at the United Nations. The. United. F*ing. Nations.

This year’s #WDSD theme is #MyVoiceMyCommunity

Of Course, Marcus must be there. He is such a great example of expression. And also finding the expression that suits him. That is him. He is an example that shows that “voice” doesn’t always literally mean – “The words I say to you right now” – his voice, like the voices of so many of our community, is as unique as it is valid.

This is important, people!

This was Marcus’ idea. He said he wanted to do this, and now we are, and I’m so proud of him. 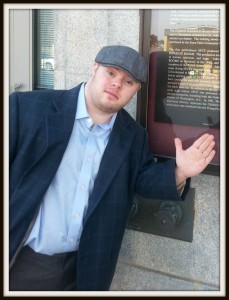 I’m so full of feels. I want to just yell, “In your face!” to the people who didn’t believe in Marcus, who tossed possibility aside and pre-determined what borders he would never cross , who chose to ask, “How is he testing?” over “What are his strengths?” Who walled him out instead of inviting him in.

I’m so excited/nervous/excited/hopeful. I’m especially hopeful that neither of us throw up while on live webcam, which *You* will be able to watch on March 21st:  live webcam info. Full event details forthcoming. For now, just forgive me while I metaphorically point in the faces of the people, long gone from our lives, who never believed in this sort of possibility.  (Those naysayers are still on my shoulder reminding me, it’s not the general assembly Marcus and I are addressing…it’s just “in the building.” To them I say – “How many times have you been asked to speak to people from around the world, ‘just in the UN building?’ Ps. In your face!”)

SO, enough about me,

DETAILS ABOUT THE EVENT here.