It all began as a small child, when he would act out entire TV shows, movies, and ideas in a combination of pantomime and song. Now, as a young adult he pursues more public shows.

The Ollie Webb Center in Omaha has a program called The Art of Imagination. This is the third year of the “Loud Mouths” production put on by Jim Hoggatt.

is Omaha’s playwriting festival where all the shows are written by people with developmental disabilities and the performances include people with developmental disabilities. This is the third year of the program. The last two years the actors carried their scripts on stage and sometimes there was even a prompter for the audience to help understand the lines. 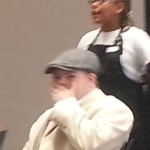 Marcus laughing on cue as a customer

Not this year! This year the actors played their parts without scripts in hand and spoke louder and clearer than any previous “Loud Mouths” performance. (Great Job Everyone!)

This is Marcus’ second show with the group. He began in their Christmas Program as an elf. This time he was cast in one of the one-acts as a restaurant customer. Not a high-profile billing, but actors have to work their way up, you know. Pay their dues. Learn how to work the stage, and all that.

That said, Jim gave the audience the chance to see everyone’s talents for creative expression by sharing between each short play what the actors do for warm-ups.

What is the actors worst enemy?

The first one was called “Statue.” The idea being Jim calls out an object or even a concept, and the actor has to quickly be that and freeze. Great fun seeing everyone’s interpretations, of course I mostly watched Marcus. 🙂

Here’s his statue of Orange: 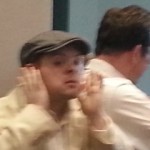 And here is his statue of Invisible: 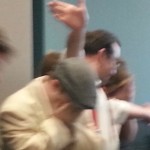 Not a great capture – but it wouldn’t be, would it?

Came the second night. (Yeah, I saw it twice. It’s that good.) One of the warm-up went like this:

Jim takes a random item. In this case it was one of these:

The second night, however…The person before him said, “That’s not a Unicorn horn, that’s a candy dish.”

Marcus took the piece and said, “That’s not a candy dish, that’s a dead donkey!”

Take that, all you who limit your imagination to things like baseball bats and frying pans! That – my friends, is a dead donkey. 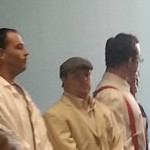 Thanks for stopping by, feel free to leave a note you were here or

for emailed updates, not too frequently, Join the Club Here.

Side bar note –
for parents, families and self-advocates:
The good news is there are, in many areas, vibrant and growing opportunities
for people of all abilities to participate, create, work, learn and play in the arts.
The bad news is,
just like when the kids are small,finding these opportunities is a challenge.
And once found,funding, transportation, and all of those technical details
also continue to be challenging.
Back to the good news side,
from exploring the internet for the appropriate links to Ollie Webb and the show
I found another inspiring group of artists looking tomake art accessible to more people, Why Arts.
We’ll see where that takes us.
Mardra2017-07-18T16:05:15-05:00Categories: Grown Ups & Downs|Tags: Art of Imagination, Marcus on Stage, now, Ollie Webb Center, Theatre Thursday, What a goofball|6 Comments