Marcus’ Speech at the Be Beautiful Be Yourself Event (Video)

One week since Mr. Marcus Sikora did his second runway walk at the Be Beautiful, Be Yourself fashion show. I can tell you now that at the event last year, Marcus told me that he wanted to give his own speech at this event. That it was not my idea. I even, gently, asked him a few times, “Are you sure?” 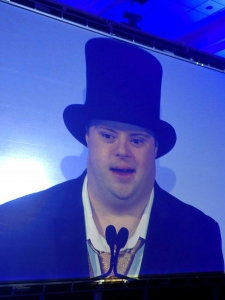 We shared the video of his speech at our local follow-up party here in Omaha on Friday. Every time it played I felt the blood flood to my face, so nervous for every line, just like the night of the event.

Sooo anxious for everyone to be patient with his pauses. Waiting the moments that he needs to find his place, re-read the words, process the sentence, and speak it. Because he does. He just needs those few extra moments which, let’s face it, are precious in today’s speed-of-day. Speed-of-event.

I admit, I did point him past a sentence or two. Friendly crowd, but got to keep this rolling, I thought. I felt the event coordinators checking their watches. I’m paranoid. It happens.

My face also burned with my own anxiety for the minute I took the mic. I didn’t have to (as in I wasn’t actually asked to) speak, however, I really wanted to give public acknowledgment of gratitude to those who were supporting Marcus and our family, and also to proclaim, for all of posterity:

“I am the luckiest mom I know.”

It’s true. It’s been true for a long time. About 27 years actually. I can’t help but get a little weepy every time I even think of it.

Marcus and I, we drive each other a little crazy (I am his mom, afterall) especially about/at events like this. Not this time, though. He just, well, he rocked it.

It came from a lot of practice.

He practiced his speech. He practiced his model “moves.” It also helps how many big events he has been a part of this year, TV interviews, speaking at the UN, and “gigs” teaching kids and grown-ups in classrooms and libraries across the country.

SO, here it is, Mr. Marcus Sikora, 2017 Ambassador for the Be Beautiful, Be Yourself event: 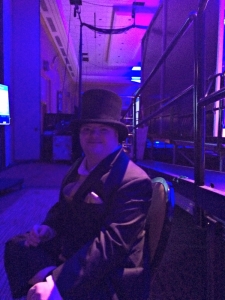 Marcus backstage as we waited to go on.

Although we were a little nervous, we know this event would be different in a few big ways. The most critical is the sheer energy and emotion in the room. To be fair, Marcus said he was not nervous. And maybe that’s true – he looked great backstage before we went “on.”

Global also made a “tribute video” and you can se that in the next post, here.

Right now, though, let’s chat a little more about the speech. Specifically the “gold-medal worrier” bit.

You may have noticed, what a thousand listeners noticed, Marcus’ knowing chuckle at my “worrier” confession.

At the after party another dad of a young adult admitted he’s a gold medal worrier, too. And we commiserated over the fact that other people often don’t “get it.” In fact, I think we agreed at the feeling of being judged for worrying. What’s with that?

Parents, you’ve earned your worry and while you work through it, I hope you’re also planning and learning together instead of only worrying and dwelling.

It’s – well – There are days, or moments, when you are the luckiest parent on the planet – Like I am – don’t let the worry keep you from those moments. These emotions can and will run parallel, forever, so far as I can tell.

I’ll leave you with that thought. If you want to read on, the celebrity and awesome pics sum up is here: Marcus and the Stars

And also a Marcus tribute video and some emotions about that here: https://mardrasikora.com/marcus-sikora-ambassador-video