Marcus on stage with Mary Poppins

Marcus sang onstage alongside the Broadway Across America cast of Mary Poppins in Omaha’s Orpheum Theatre like he owned the show. On the three year anniversary of his stage debut, I’ll share the story. Part One – How did he get there?

Puttin’ on the Ritz 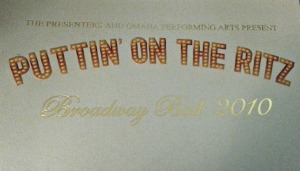 It all started with this program for “Puttin on the Ritz” The Omaha Performing Arts primary fundraising event for 2010. I saw a copy of the evening’s program in the printshop and admiring the design and workmanship, I opened it to glance through the pages.

Then I saw this: “Life’s a Jolly Holiday with Mary” auction item.

Basically, the OPA was auctioning a “walk-on” role with the travelling Broadway production.

My heart jumped into my throat. The auction event was that night.  I quickly called the OPA and asked to “crash” their party.  They graciously agreed.

To describe what went through my mind…

Remember Bert at the beginning of the movie Mary Poppins? He’s walking with his “One Man Band?” Honk! Crash! Rattle! Honk! Crash! Squeeeeeze! Crash! The noise in my brain sounded much like that, combined with my heart racing and the whirring of “This has got to happen” pulsing through my veins.

I sat at my desk and wrote an email with the subject heading: What would you pay to see Marcus on Broadway?

Marcus in a Broadway Musical?

A friend of mine had recently crowd-funded her latest CD.  I thought, let’s do this!  The more help I could get, the better. I hit send on the email and the offers came back – $30. $25. Plus others including one: “Everything I own.” Even while we sat at the event one new friend called and said – “Am I too late? We’ll throw in fifty bucks.”

I also called one person I knew who was a frequent supporter of Omaha Arts, I asked him what he thought this would go for. If it was $5000, I could get help and squeeze my credit limits. If it was $10,000…gulp. I’d have to walk away. Crushed.

As scary as that possibility was – I decided Marcus should attend with me.  There would be performances in addition to the auction and no one loves live more than he does.

While we were at the dinner portion of the evening, I’m pretty sure I rambled on about the possibility and my call for help.  I was not cool as a cucumber – I was nervous. In hindsight, showing my cards as too how bad we wanted this could have inspired the OPA to get someone to drive up the bidding. And maybe they did. But I doubt it.  Because when the lady sitting next to me asked, “How high do you think you’ll go?” I blanched.  “I don’t know.” I replied, “But I hope it’s not too high because this moment was made for Marcus.”

Marcus and I planted ourselves in an easy view spot for the auctioneer…the moment of truth came and went in a blink of an eye. Several contenders began when we started with, how much?  I’m going to say $500.  That didn’t last long. It quickly came down to one other set of bidders and us.  I didn’t dare turn around, though I considered having Marcus stand up.

After the auction was a dance, where Marcus was the king of the dance floor. The ladies L-O-V-E-D him.  I had to sit and nurse my drink, practically secluded in a corner.  Moms don’t get to dance too close to their sons when the son is the life of the party.

I texted the news – We Got It – to everyone.

THEN I began to worry. What if they see him and don’t let him on stage?  Disney is very protective of their brand.

Well, actually I worried about that even before the auction began. Which is why I told Marcus we were bidding to meet the cast. Not to be in the cast.  That was my story (to him) and I was sticking to it until I knew for absolutely positive he would be on stage.

Also – after the event, Wright Printing paid the auction price as a donation to the OPA. Woohoo!  Everybody wins!

SO from there the months crept by. I experienced temporary amnesia about my nervous blabbing at the event, so I thought I’d just lay low and slide Marcus in under the radar when the days grew closer.

Soon enough, there was the call/emails asking for his measurements and setting up the time for a costume fitting.  Then there was a contact that mentioned the press, could we do interviews both at the fitting and chat with the press about the event? *Sweeeeeet* I thought, they wouldn’t dare turn away Marcus after the press gets their hands on this.

UM DUH – Who called the Press?  What could be better press than this stage debut? I’m sure there would have been press releases and interviews of anyone who took/got this unique opportunity. But this…this was good.

Really. I did not put that together for a while. I was too worried about making sure this all went forward for the boy.  It never occurred to me that my blabbing and Marcus himself were also considered a huge boon for the OPA. This was a publicity gold mine!

Fine by me.  The most important thing to me was…no going back.  This was now real – Marcus was doing this. So read on in Part Two –

*From the Mary Poppins Broadway Soundtrack, “Anything Can Happen (if you let it)”