On Tuesday night I had the pleasure of sharing a bit of Marcus and his stories. 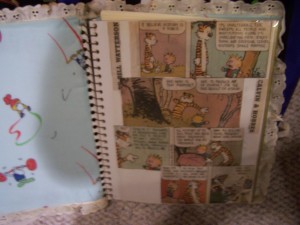 I started with how Bill Waterson prophesized the impact that my son, Marcus, will make in the world, and even a bit of how he’ll do it. Bill Waterson is the writer and illustrator of a cartoon strip called Calvin and Hobbes. I shared the strip that ran on the Sunday of the weekend that over-the-counter science confirmed my pregnancy.  I read it from page one of Marcus’ baby book. You can read it here. Notice in the last scene that Calvin is using his place as “the end result of history” wisely. He is being entertained and in doing so entertaining us.

This all ties into the prophecy. Marcus’ favorite form of entertainment is theatre. He has always been a fan of live theatre and of musicals in particular. 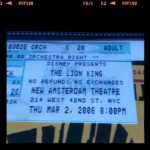 When we took him in 2006 to see The Lion King on Broadway in NYC, everything changed. The metaphor of a light bulb blinking on over his head is an understatement – more like a meteor shower began. Since Lion King was a show he already knew that was taken to the stage – the first thing Marcus did with this concept is begin taking every other show he knew to the stage. He would tell me constantly about turning this movie or that TV show into Broadway and we would talk about how to make that happen. What theater magic would be necessary and who should be cast in what roles. It began filling up his mind so much that I had to contain it. So we began every Sunday morning as an exclusive time to work on that week’s Broadway List.

From Listening to Notes

Soon, I felt compelled to start keeping notes. I feel like the first time I rushed to get my notebook was when we were talking about the Muppet Show. Similar to Broadway, Marcus liked to fill in guest stars on the Muppet show and tell me about the skits they would do. He was talking about Jim Cary on the Muppet Show, Jim Cary practically is a Muppet so you can see the potential, but this is where Marcus’ originality came in –  He proceeded to explain to me that the gimmick for the show: Jim Cary would do stand-up comedy (OK, logical) and that he would do jokes that Fozzy bear wrote (both comedians, good) and that Statler and Waldorf would love it. (Uh Oh! Twist!) This would drive Fozzy Bear crazy of course, since he is always getting heckled by the two old guys, but Jim Cary they loved. Poor Fozzy. Pure comedy.

Truth be told, some ideas Marcus has are pretty great and original and some are a rehash of another idea and some are like a crazy acid trip. As we began seeing more shows, shows that he did not know before he went into the theatre – then it dawned on him to take his own original ideas to make into live productions. We started breaking down the formula, we talked about adventure and conflict and the elements of a good story.

Marcus is a big fan of Halloween. SO we began working on a Halloween Musical called Black Day about a monster band. Black Day intrigued me,  I kept bringing him back to it and asking about the next step. Then, after he had created the characters fully in his head and it seemed a consistent story was coming from him, I suggested we make it into a book instead. SO I “mind mapped” the story with him. There were holes and questions, as any first draft is prone to have, so I’d ask him for more details, where, and why. We’d work until he’s say, “Stuck.”
I get stuck.

So we’d stop and pick up the next week, until we had a complete story. There were bits from the original draft he changed there were inspired moments along the way. And now – we have a complete story that you may have seen me teasing you with bits about on Facebook.  Well, the illustrator, Noah Witchell, is hard at work and soon the printers will be involved. Oh, and don’t forget the animations, voice over and DVD. HOLY MOLY. I read the story out-loud the other night but now, if you want more sneak peaks, you’ll have to Join The Club.
We’re excited about this process and know it’s the beginning of so much more!