We celebrate Amy and the Orphans, with Jamie Brewer (Amy) and Eddie Barbanell (Andy u/s) for many reasons. One is that while the audience is lulled by small identifying steps with characters who are “typical,” they are simultaneously being prepped to listen to a person with Down syndrome speak truth. Also, hard facts spotlighting the treatment of people “put away,’ maltreated, neglected, and generally handled in less than humane conditions come forward.

The recognition that this man or woman standing center stage could have been in that same circumstance as his/her character, had he been born in a different time…to a different family…simply because of 47 chromosomes, creates a tangible impact throughout the theater. 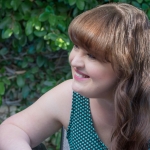 Jamie Brewer and Eddie Barbanell, they are exceptions to the Down syndrome “rules,” right? Not everyone with Ds can be on Broadway. Yeah, well…Duh. Not every typical actor makes it to Broadway, either. It takes an amazing balance of talent, hard work, opportunities, and support.

Brewer and Barbanell show the world two examples of potential and possibility.

Then there’s the institution, Willowbrook…also an exception? Sigh. I wish. Even today there are so many harrowing stories of abuse and neglect, trauma, and death of people with disabilities. The supports for people with disabilities and those who care for them is dreadfully lacking around the world and our country, which is full of people who “know better,” yet still lacks, lacks, lacks…

The playwright Lindsey Ferrentino, who chose to visualize then realize this story, was inspired (in part) by her aunt Amy, a woman with Down syndrome who learned, laughed, and shared her passion for life with those close to her. Ferrentino discovered her aunt’s life lacked encouragement, education, and possibility. The dedication in the script reads:

For my Aunt Amy Jacobs

That tells you a good bit of what you need to know to understand the themes, and desired impact, of this production.

As the story unfolds, there are two parallel character timelines, one of the current day, with Amy and her siblings, and one that is a flashback to Amy’s parents. From those scenes, we witness the mother’s decision to put Amy as a baby, in an institution. The father is portrayed as conflicted, but compliant.

His reply came straight away, “Amy’s parents are bad parents.”

My mind rushed. I quickly scanned my memory for this in the dialogue. “Who said they are bad parents?” I asked.

Really. Snapped. He said this decisively and a little angry.

I took his hand. “We wouldn’t; we never could.” I took a deep breath, “You’re right.”  I tried to keep it together in that Irish Pub across the street from the theater.

First off, shame on me. I did the opposite of what I preach, I scanned my mind for where that sentence came from, instead of first recognizing that it’s his personal opinion. “Amy’s parents are bad parents.”

I’m not the best parent.

I’m careful to tip-toe around parent’s feelings, and “another time” considerations.

I recognize, who am I to judge another’s decision? I’m just another parent and am far from being a perfect one. In some areas, I’m particularly weak and down-right bad at this mom-gig. (Current low points include but are not limited to, paperwork and finding/using supports.) When I look at our past, there are cringe-worthy moments that make me thankful there wasn’t the film-first-then-judge-social-mob environment in Marcus’ young years. Oh Lordy.

The truth is, my biggest strength – holding on to my sweet Marcus as my own life depends upon it – is also a true weakness, as his mom. Therefore, I dare not pass judgment on any other parent who is truly doing their best, choosing what they feel is best for the wellbeing of their child.

But you know what?

Marcus has every EVERY Right to call Bullshit.

Can you even imagine? Can you imagine how many times Marcus, and every person with Down syndrome I know, has to endure hearing how hard it is (or was) on someone else that someone like him was born? How many times has he purposely distracted himself, like our Amy in the play does, from listening to people talk about him or people like him? Forced to distract himself from the onslaught of how Down syndrome is so hard…on someone else.

Marcus’ quality of life depends, in no small way, on how society chooses to value people who may look a little bit like him. Marcus who, had he been born to a different family, may very well be neglected, stowed away, or killed, just for having 47 chromosomes…

He has full right to be angry. And to proclaim his feelings about the parenting decisions of the characters in the story. Honestly, every time I play the conversation out in my head, I’m overwhelmed by an emotion I can’t pinpoint – something like grief and pride and “Hell Ya” and “Oh Honey…” all wrapped into one. We do kind of a lot of rage-squashing in our house, so it’s no small task to say what he thinks about this.

Back to Amy, or rather Jamie…

I asked him if I could write this down, which I did on my phone while we were in the pub. After the show, we had a chance to chat with Jamie Brewer, in order to have notes for an upcoming article in Down Syndrome World Magazine. Jamie shared how important to her this play is as part of her advocacy.

As I shared in my reviews here and on The Mighty, Amy and the Orphans culminates with our protagonist (Amy most days, Andy others) holding the audience in rapt attention during a final monologue. It’s an amazing, emotive claim to life that includes many great lines.

Jamie told me her two favorites are: “Who the fuck do you think you’re talking to?” (A line she delivered with great passion.) And, “Nobody puts baby in a corner.”

My favorite line was, “MY LIFE HAS VALUE” (emphasis of all caps actually in the final script).

And that’s not even all, the monologue continues with a conclusion designed to hit home, hit hard, and hit the hearts of every audience member. I know I was left like I had been kicked in the chest, so there’s that.

Marcus said he liked the monologue best, too. To be honest, he said he particularly liked the cussing. Perhaps it evokes the rage and self-awareness that he feels and shared with me at the pub. Or, it can be that an appropriately dropped F-bomb can be very cathartic. Maybe a little of both. 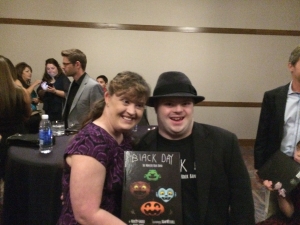 My final takeaway for today is, sometimes we fight for what is right, even if we know we cannot win. There are many days, this where advocacy lives. But, while Amy and the Orphans runs eight shows a week, I think that’s one win for our side. Hard won, but won, with many thanks to Ferrentino, Brewer, Barbanell, and the Roundabout Theater family.