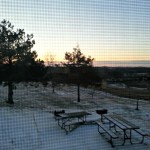 Like many people, “getting away” is one of Marcus’ favorite things.

Without TV or internet, we roughed it…

With our computers, IPods, starter logs for the fireplace, crockpots and Cheetos, of course!

The cabin weekend was full of Marcusisms. 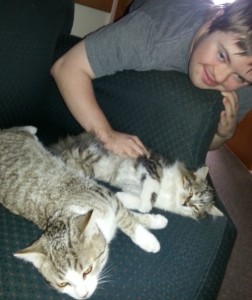 Marcus & Kelly’s kittens in the Cabin

“I am not a housewife!” I replied.

That’s our call and response joke. He calls me a housewife and I deny it.
*Because I am so not a housewife. I work from home. The difference? My state of my house.
‘Nuff said.*

Kelly asked Marcus, “Do you want to write my story? I need some funny stuff.”

He continued with, “Just kidding.”

Then walked by us each and “flicks” us with his thumb and forefinger, “Flick Mardra eh,” “Flick Kelly eh” he says as he walks by. Flicking is a signature Marcusism, used on about everyone he knows.

The most predominate Marcusism is this simple  phrase, “You’re the best.”

He’s been handing out this affirmation for as long as he could put a sentence together. Without exaggeration. His first complete sentence that I recall was, “I want ice cream, please.” Then, one day after seemed like an eternity later, he said another complete sentance, “Quinn’s the best dad ever.”

At the grocery store, he often mentions to the cashier, “You’re the best,” as we check out or to a server at a restaurant. I often repeat it to them. This particular phrase is said quite clearly, actually.  But I guess people aren’t used to hearing it. Or they assume he’s talking to someone else. No, dear stranger, you have just been told ‘You’re the best.’ Run with it.

Can you I imagine having the wherewithal to hand out such a glorious compliment to strangers? I mean, seriously, how hard does someone have to work for you to tell them, You’re the best! And to your friends and family, have you said anything this sweet to them lately? Of course it’s completely unfair for me to ask this, because I have been trained buy Marcus and therefore hand out this particular phrase all the time.

However, I will say no one seems to believe it coming from me as easily as coming from Marcus. Which is fair. Because he hands out compliments without any agenda. He’s decided you’re the best, and he tells you so. As simple as that.

“Kelly’s a Goofball.” Then…“Write it down, Mardra.”

Don’t miss out on further Marcusisms and updates from Grown Ups & Downs. You can “Join the Club” here for email updates.