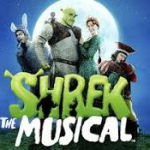 Yesterday Marcus and a few friends and I had a “Musical Marathon.” We listened to Broadway soundtracks and watched musicals all day. His kind of day.

His favorite Broadway musical is Shrek the Musical.

Now, if you are a theatre connoisseur, resist the temptation to thumb your nose at the concept of animation turned theatre concept. As we all know, Lion King made that assumption null and void.

The fact is Marcus was a huge Shrek fan from movie one and when we saw a musical was in the making, we made plans to head to New York City. Shrek the Musical did not disappoint Marcus. It became his favorite and has held that #1 spot through every show since.  Why? This song right here: “Who I’d Be.”

“Who I’d be” is Marcus’ favorite song and he sings it himself whenever he gets the chance.  Last year in our writer’s group he performed it for the small group as his contribution to the “reading” portion of our evening.  There were a few tissues in use.

I want to share Marcus’ rendition of “Who I’d be” with you all. But, well, I’m not ready to do that, yet. In the meantime, check out the lyrics and Brian d’Arcy James’ performance, the one Marcus saw on Broadway and you can see on the newly released Shrek the Musical

DVD, and I think you’ll see why Marcus loves this song so much.

[Shrek]
I guess I’d be a hero, With sword and armor clashing
Looking semi dashing, A shield within my grip
Or else I’d be a Viking, live a life of daring
While smelling like a herring, upon a Viking ship.
I’d sail away, I’d see the world, I’d reach the farthest reaches
I’d feel the wind, I’d taste the salt and sea.
And maybe storm some beaches.
That’s who I’d be. That’s who I’d be.

I dreamed I’d be a poet, Write a different story,
One that told of glory, and wiped away the lies
And to the skies I’d throw it, the stars would do the telling
The moon would help with spelling, and night would dot the ‘I’s
I’d write my verse, Recite my joke, it’d fit in perfect timing.
I’d share my heart, confess the things I learn, and do it all while rhyming.
But then we learn. But then we learn.

So yes I’d be a hero and if my wish was granted
My life would be enchanted, or so the stories say.
Of course I’d be a hero, and I would scale a tower
And save a hot-house flower, and carry her away
But standing guard there’d be a beast, I’d somehow over whelm it,
I’d get the girl, I’d take my breath, and I’d remove my helmet.

We’d stand and stare, we’d speak of love, we’d feel the stars ascending
We’d share a kiss, I’d find my destiny
I’d have a hero’s ending, a perfect happy ending.
That’s how it would be
A big bright beautiful world

But not for me.

[Donkey]
In the dark and all alone

(All at the same time)

Shrek the Musical Broadway style is out on DVD now.  I think it’s safe to say Marcus officially endorses this, and I agree.  There aren’t many DVD releases of theatre performances, we wish there were more. So, selfishly, we strongly encourage you to purchase this on DVD on give the clue to Broadway – make more!  This is Marcus the morning we expected to get Shrek in the mail:

@briandarcyjames RT This is @MarcusMusical waiting for #Shrek The Musical in the mail. May be a long day… pic.twitter.com/aOKXJM8Wnd #BigFan

And while we’re at it – it’s a great soundtrack, too!

What’s your favorite musical? What Broadway show do you wish they put on DVD? Just this morning Marcus woke up asking to see The Book of Mormon on Netflix.  I told him, “They haven’t made that yet.” “Just make it,” he said.  “Maybe they will,” I told him, after all, all his wishing worked for Shrek.