The Mystery of Marcus

The Bates Motel asks: “What mysteries do you want to see unraveled for the future for your child with Down syndrome?” *Actually, she asked a few years ago as his is a #TBT post originally posted in July of 2013.

That’s a heavy question and one that I hesitate to answer via the internet. But that’s why we’re here, right? To shed light and truth. Yes, it is. I purposefully waited to write my thoughts about unravelling mysteries, until after attending a webinar provided by the Global Down Syndrome Foundation and DADS (Dads Appreciating Down Syndrome) about research and Down syndrome.

Two primary scientists spoke, I think most of it was English though I can’t actually confirm. Some of the words could have been Greek.

The information included a lot of talk about chromosomes, and genes, and cells and proteins, especially the amyloid precursor protein.  This particular protein is a culprit and connecting factor between Down syndrome and Alzheimer’s disease.  That’s the way I heard it anyway. I’m going to share more about this meeting after I have access to the slides and can listen again; it was a lot of information and my quickly scribbled  notes will not do it justice here. The main takeaway, without the official notes, is this: There are scientists working to find out ways to reverse, slow, or stop the progression of Alzheimer’s disease specifically in adults with Down syndrome.

Why is this important? Well, everyone is dutifully afraid of Alzheimer’s; that goes without saying.  Adults with Down syndrome are more likely to develop early onset Alzheimer’s than the general public and after getting our children through the battles heart surgery, sleep apnea, and school boards, none of us want to battle that demon.

I didn’t learn about the Alzheimer’s threat to my son until he was just about adult age. I was figuratively taking a deep we-made-it breath, and then I read an article that mentioned the sucker-punch of early onset Alzheimer’s frequency in adults with Down syndrome.

Back pedal: When Marcus was born the doctor handed me a book, I wish I had that book today or even remembered exactly the title, something like Your Child with Down Syndrome. (I wondered what book they gave the woman in the room next to me. Healthy Baby 101? Both thankful and annoyed by the existence of the book, I treated its existence with a passive aggressive begrudgery.) While staying in the hospital, those first few days of Marcus’ life, I read the book nonstop.

One section I remember spoke of potential and learning.  According to the book, people with Down syndrome, if given the opportunity, do not stop learning.  A chart showed typical people plateau at about 18 years of age (they may keep learning, but not on such a steep curve as previous years) and the person with Ds keeps right on learning, the curve never stops. Alright, I thought. Then we’ve got his whole life to figure things out together. I took this as a very good sign and tucked it into my plan.

All that said, I felt good and even hopeful after listening to the scientists actually tackling this battle.  Also I became encouraged by the assumptions that it’s possible to prevent or stall Alzheimer’s disease through environmental factors that are within our control. But most of that mystery, I must leave to science. I have a squishier wish than that. I wish that more people would participate in discovering the mystery of Marcus. 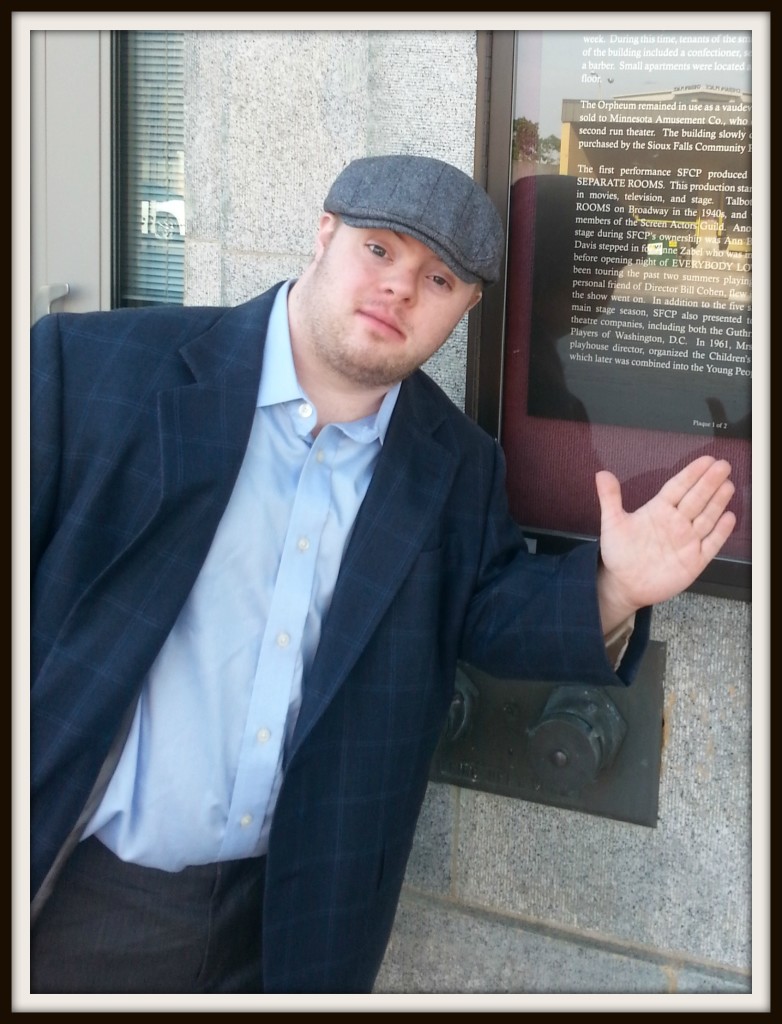 For many, including much of my family, Marcus remains more a mystery than a person. For me, that’s the biggest worry for his future. Tomorrow is promised to no one, including me I guess. So, what happens to my beautiful, hilarious, imaginative son if I’m gone? Who else appreciates him for who he is?

There are a few. But it’s too few.

When holidays come around, will they bring him to family gatherings, set him in front of the TV and let him be? But that’s not what I hope for him.

Who will listen to his stories? Will they continue to teach him? Who will push his caregivers to make sure…? Ugh.

Marcus is not stupid. If you patronize him, he ignores you. I’ve seen it a million times. If you don’t actually listen to him, he stops talking.

Nobody’s “in” jokes are funny ‘til you know them.  His are really funny. Remind me to tell you his Darth Vader knock-knock joke sometime. (Actually, since this is a #TBT – you can check out the Darth Vader joke here – if you’ve seen Star Wars episode three – you may love it.)

Just because he doesn’t initiate the conversation doesn’t mean he has nothing to say. He’s an introvert.

Ok so I’m biased, I assume that the people who haven’t connected to Marcus haven’t given him a full chance. It’s hard for me to write this because I have to blink through the tears.  I don’t get what’s so hard about it.

So there you have it, the honest truth. Dear Everyone, if you would just take a moment to know the mystery of Marcus, your life would be better and my worries for his future would be calmed.