#NeverAlone and Down Syndrome Diagnosis

It’s Thursday October 1st. That means today is the first day of #DSAM15 – Down Syndrome Awareness Month, or as I like to call it:

As a blogger it is my duty to be a part of what I call the Google-War: The battle to get current, positive information into the ether when folks Google the diagnosis Down syndrome. One way we do this is in October when bloggers rise to the challenge of 31 for 21. The mission is to put up a blog Every. Day. (in October.)  So, in order for me to make this work, I am not only going to share new stuff but also my most popular old stuff. Some may call it re-runs, but I prefer to think of this October as featuring the “Best Of” Grown Ups and Downs. I’m starting with this post which originally went up in July of 2014 because I’ve been thinking about the “birth story” a little bit, the reason is because in the media interviews Marcus and I have had so far, I have been asked about my emotions and whatnot surrounding Marcus’ birth, and honestly, that took me by surprise because, well, he’s 25 and my emotions at the time of his birth have no bearing on the awesomeness of his book and all that – – – but then, I guess to the media and the story, it does, and always will. Of course I’ve shared the “birth story” in more than one blog and in more than one way, hell, I’ve even shared it via fiction in some ways. So today, for a combo Throw Back Thursday and #DSAM15 kickoff –

I had been awake for well over 24 hours, the little man having taken his time to push his way from my body’s protection. G, Marcus’ original dad, was in the room with me when the doctor came in and said, “Down syndrome.” I do not remember him being brash or unkind. In fact, my hindsight leads me to believe he was watching the subtle clues in the months previous and perhaps was not surprised. G asked the doctor if he was sure.

“99% sure. I have ordered blood tests to confirm.”

Before he left the room he said he would return with a pediatrician. G pulled from his backpack a college psychology book. He looked for information, found an entry and read it out loud. It went something like this –

He closed the book and looked at me. I looked at him. So, what does it mean again? When the doctor returned with the pediatrician. He gave us a more thorough picture of the medical concerns specific to Marcus, like a concern with a hole in his heart. And a book. As I remember it, the first line in the book was this: “Do not put your child in an institution.”

Um…What are you talking about? No one is taking or putting my son anywhere. 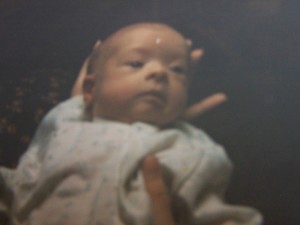 The first time I held Marcus, I saw something I didn’t recognize. The next time I held him, a few hours later, I now knew what that was. And in a moment it disappeared. That “something” melted and then there was just him. Just Marcus. There in my arms listening to me yammer and sing to him. Listening to me plead with him to eat and cooperate with this bright world full of pokes and wires, so we could go home and make a plan. A battle plan if necessary.

I knew Marcus already, I knew he was a fighter, and if life itself was going to be a battle – he would fight it. I was able to foresee Marcus winning these battles in part because I knew him. And holding him and loving him gave me the strength and hope to believe in his future and the value of his life. At that time I had heard that it’s often harder for fathers to accept and cope with a baby’s diagnosis. I expected it was because they, the fathers, did not have the already established bond that mothers are privy to. I have found that fathers who claim the precious moments needed to hold, kiss, love their son or daughter, these fathers also find strength from their child and the love and life that is there.

Nowadays there are parents given a Down syndrome diagnosis for their child long before the baby is born. They do not have the benefit of their babe’s sweet face staring into their own. They do not feel his fingers around their own, or see the way she curls into her mother’s arms. I expect they feel much more alone.

Lettercase.org works now to help them. #NeverAlone is the movement to be sure that with a prenatal or postnatal diagnosis, parents are not left with old, tainted, false information. For me, Chris Burke was a shining beacon of hope for the future. Of possibility. The show “Life Goes On,” where he played a primary character, was on the air during the years of Marcus’ birth and his baby years. I could say to people, “Down syndrome – Like Corky from ‘Life Goes On.’” and give them a positive image instead of an image, well, from an old psychology textbook.

#NeverAlone does a similar job by showing real images of children and adults with Down syndrome. The information for parents is about real medical answers to possible complications. The flyers include accurate and up to date information about real people with Down syndrome and their families. You can support the #NeverAlone mission with words or with dollars or with both. Learn more here: http://lettercase.org/neveralone/

Thanks for stopping by, feel free to leave a note you were here or for emailed updates, not too frequently, Join the Club Here.

*This post is only one tidbit of our Birth Story and the day Marcus was diagnosed with Down syndrome, it is only one teeny tiny part of our journey. #NeverAlone is a campaign designed to help parents to-be make informed decisions and parents of children with Down syndrome to find resources and families that will support the potential of their child. *