A Note From Marcus’ Dad

Today we have a special treat: A guest post from Quinn!

I knew I was in trouble the moment I met Marcus. He was 2 1/2 years old and tiny. He looked at me and smiled, only it wasn’t a smile of courtesy at being introduced, it was a smile of great enthusiasm as if he already knew and loved me; like I’d returned. It scared me.

At first, it was because I had a thing for his mother, and by way of implication, that could mean a heavy responsibility was literally staring me in the face. The array of responsibilities already denounced after a failed marriage. I had no desire to ever marry again, let alone have children.

He told Me a Story

So then, Marcus started to tell me a story, using his voice but not with words at that age. I could tell that it was a complex story, full of rich details, all of them happy, some of them wonderful. He smiled the whole time he talked, and he never took his eyes off of me. What a wonderful story to tell – this amazing, energizing, how-cool-is-this story, and he was so happy that I was there to hear it.

I am the only one who ever heard that story, and I recognized that while he spoke it. For that minute, there was me, him, and his story. That was the real reason it scared me, because I recognized- as I had with his mother- we were connecting.

A Year and a Half Later

I walked into the taxi-cab office the day lease payments were due. The office manager, a classic “yeller,” was being his usual hot-headed, demonstrative, and loud self. “Whaddya mean you don’t have your lease?! The money’s OUT THERE! GO GET IT!!”, he shouted at the guy in front of me. 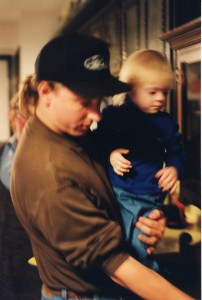 His face was still red when I approached the window with Marcus on my hip. A little worried about Marcus’ reaction to the loud man, I also worried about the man’s reaction to my bringing Marcus to the office with me.

“Just tell me you’ve got your lease, today, Qu- aww, will ya look at that little guy.” Before my eyes, Mr. Loud melted into a smile that would make you think Marcus is his favorite grandson.

As it happens, this boss had an adopted brother who also has Down syndrome, and he loves him. “Yeah, they’re great people, Quinn,” he said to me, and then a profound sentiment from the man previously voted Least Likely to Utter Profound Sentiments: “You know, if there was someone like that in every home, the world would be a better place.”

I still marvel at that one, nearly 20 years later.

He’s right. The whole world would be a better place. Draw some conclusions about what would happen if someone like Marcus were in every home.

Someone who didn’t judge, who is honest, who forgave easily, whose “agenda” included laughter and peanut butter & Jelly as top priorities. Imagine if every household had to change their priorities to include caring for a person who gives love freely in exchange for, well, loving them back.

The implications are scary again, in a good way. 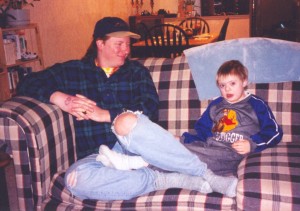 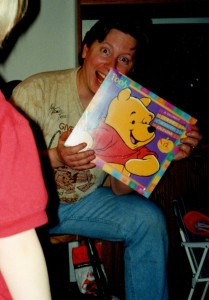 Speaking of scary, Marcus and I still enjoy watching The Simpsons, especially the Halloween episodes. 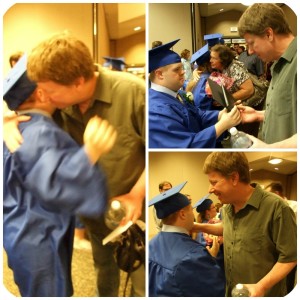 P.S. I still have a thing for his mother, Mrs. Sikora.

Back Atcha! To the “Best Dad Ever!” per Marcus.