The sun shone in through the small hopper window near the ceiling.  I woke up slowly and watched the sun beams that drifted to the floor. I knew it. I was a mother. From the outside I did not look ready for motherhood.

In my heart, I was ready. I smiled. I quit smoking.

The next week I went to the Doctor’s office for a pregnancy test. I didn’t bother buying one from the store because, well, as I said – I knew.

The test came back negative. The nurse and I spoke a bit about why I thought I was pregnant.  (For the record, I did have real physiological symptoms which I will not bore you with.) She shook her head dismissively and wrote in the chart.  I began eating lemons; friends just looked at me and shrugged.  Three weeks later I bought a pregnancy test at the drug store and it confirmed my knowledge. I returned to the doctor.

I wasn’t what anyone would call glowing and lovely. I worked in a Mexican/American fast food restaurant. Cleaning tables at the lower, sunny end of the dining room I remember thinking, as the feeling from my stomach took over my whole body, Is this what it feels like to have to throw-up?  I scooted into the bathroom. I was right.

The tumultuous relationship with my boyfriend got worse and worse, my friends and family urged me to leave and one night, I did.  My mother, in what appeared to be her first ever truly maternal moment took me into her home. Well, kind-of, it was her boyfriend’s home – but she lived there and now, so did I with a mattress on the floor of the living room.

No one was interested in hiring a 19 year old, 5 months pregnant, with a green complexion.  My mother said I looked like an olive with a toothpick stuck through it.  Likely a very accurate description.

On Valentine’s Day, my baby gave me a lovely gift. He kicked. I still battled nausea daily, but he was growing and moving. I told my mother, “I don’t know why this baby and my body don’t agree, but every time I am sick I know he is a fighter.”

That doesn’t mean I was chipper about the whole sickness, thing. However, the time a relative said to me in my feeble state – “If you really wanted that baby, being sick wouldn’t bother you.” I stood shocked and crushed, “WTF?” was not yet trendy but summed up my internal reaction.

Because the fact was, I did want “that baby.” More than anything I ever knew before. Enough to take a chance with my mother, then take a chance with Marcus’ father, again. Enough to wade through the bile and weakness that filled my being when strength and self-sufficiency were my previous avatars.

At almost exactly eight months, just when I was starting to feel hungry, BAM – pancreatitis. That sucked, for the record. I reached a friend’s door and said, “Is everything supposed to hurt?” She helped me to the emergency room where, just inside the doors, they sat me in a wheel chair. Then the contractions began and I passed out from the combined pain.

Soo, in my blacked out state I was given medication to stop the contractions. (Remember the doctor believed we were only seven months in.) The next day I had my first ultrasound.  My little one confused the technician with his head size compared to his overall body weight/size. 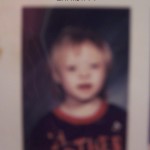 Marcus in his “Oh Bother” T-shirt on picture day. Exhibit A.

The technician pointed to the screen, “Look, he’s sticking out his tongue.

“Oh great,” I said, “He’s already ornery for the camera.” I laid looking at the ceiling,

“I foresee years of difficult school pictures ahead.” (I was right about that – see exhibit A)

I stayed in the hospital a few days. The heart monitor attached to my belly echoed a swooshing sound for the baby’s heartbeat. Every nurse commented on it. I felt my doctor knew I didn’t have help at home and, though I was on government assistance, he was kind enough not to quickly “boot” me out. I was released with medication to stop the contractions and a very strict and limiting diet. I was allowed 3 grams of fat A DAY. Think about that.

In order to keep contractions under control, I learned the real trick was to sit still and not stress. I also learned to live on baked potatoes with fake butter and fire ball candies. My friend Kelly would come over and we played solitaire, next to each other, for hours. Calm. Still. Don’t Stress.

Back to the due date issue, I trusted my baby would know the right time to appear and I reminded him, “I know, as soon as you can make it outside of me, this body will kick you out. Cook until you’re ready, little man.”  And I was right. The morning of June 19 my water broke. Nothing would stop him from coming now. I knew the time was right.

Side bar: Since the doctor and I disagreed the entire pregnancy about the false negative.
The first thing I said once Marcus was born was: “When did I say this baby was due?”
“He does look fully term,” he conceded. I reveled in that small victory,
but admittedly he seemed a little distracted while he wiped the babe clean.

The doctor wasn’t worried about prematurity. In hind sight, I believe he took in those small indicators that the technicians and nurses glazed over (in my presence).  The Down syndrome features did not surprise the doctor.

Another sidebar: People have asked me when I’ve mentioned this, “Why didn’t he tell you?”
Really? What good could come from telling an already stressed out,
8-month pregnant, 19 year old, single mother (in 1990) that her baby showed signs of Down syndrome?

Those 9 months were the longest of my life. With at least 6 different “homes,” and I use the term loosely. Sickness, hunger, fear, anger, disappointment, shock, revelation…all of this dissipated when I held my son in my arms.

Sure I was shocked and scared when three hours into my official motherhood I heard the phrase “Down syndrome.” However, no label could ever ever overpower the connection between us, my son and me.

I was a mother.

The world became ours in that moment.

In the frantic worries of the next few weeks, I did not yet know how many more precious, wonderful moments awaited us. 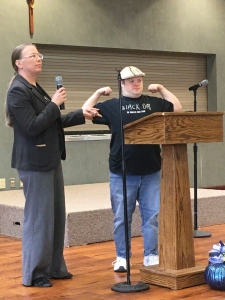 , WHAT?! Nope. This is a re-re-post, originally posted 7 years ago. Now we’re coming up on Marcus’  30th Birthday! Whoa – much to celebrate while also looking forward to te many more joyous moments to come. –

Sharing again for new friends, this is the beginning of our story.